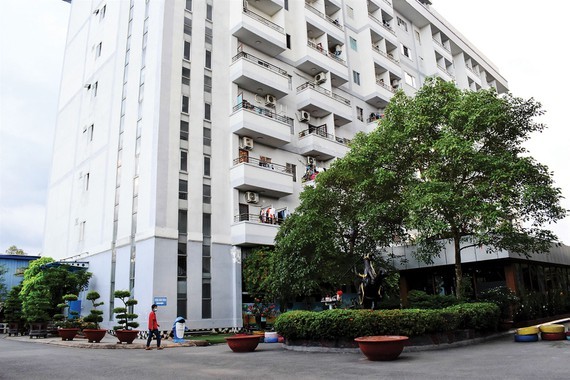 A worker housing in HCMC
The Government has just submitted to the National Assembly a fiscal and monetary policy package to support the program of socio-economic recovery and development.
As per the policy, about VND6,600 billion will be spent to support rent for four million workers in industrial parks (IZs), export processing zones (EPZs), and key economic zones to help workers reduce difficulties in finding accommodation. However, in the long run, it is necessary to seek a more radical solution.
Worker Bui Kim Thanh of a leather shoe company in Linh Trung I EPZ in Ho Chi Minh City said that due to the impact of the Covid-19 epidemic, her company has temporarily stopped working since last year, so she had to take a break from work.
Although she has returned to work for a few months now, her family life is still very difficult, especially since the end of September 2021 when her husband died of Covid-19, leaving behind their two children. She said that her present salary is roughly VND5 million -VND6 million a month but she has to pay rent, electricity, and water and raise two children every month, so life is difficult.
Therefore, she is happy at the news that that the Government will soon have a policy to support workers in the rent.
Out of about VND6,600 billion which the Government will spend to support rent for workers, about 400,000 workers returning to the labor market will be given VND1 million monthly each and 3.6 million employees working in enterprises will receive VND500,000 a month.
Landlord Vo Thi Ha in Linh Xuan ward in Thu Duc city, Ho Chi Minh City, also shared that during the fourth wave of Covid-19, many workers still accepted to stay in Ho Chi Minh City, many of them volunteered to participate in the fight against the epidemic.
Therefore, landlord Ha hoped that the housing support package for workers will be issued soon and regardless of whether workers work outside or inside the IZ and EPZ because all workers have contributed to the city’s development in particular, the country in general.
Although many people have advocated for the Government's policies to support workers and employees, they have voiced concern that this support package hardly covers all workers, leading to unfairness.
According to General Director of Tan Quang Minh Production and Trading Company Nguyen Dang Hien, it is necessary to provide rent support for workers, whether more or less, to help them reduce daily difficulties.
However, the support package that the Government submitted to the National Assembly is expected to spend support for workers who are working in industrial zones, EPZs and key economic zones. This has shown unfairness because many small and micro enterprises outside the IZs and EPZs in Ho Chi Minh City hired scores of workers. These people are not eligible for assistance.
Additionally, lots of seasonal workers in industrial zones, EPZs, and key economic zones without labor contracts will not be eligible for the government’s assistance; therefore, the Government needs to study and expand the beneficiaries of this policy.
Chairwoman of the Ho Chi Minh City Confederation of Labor Tran Thi Dieu Thuy informed that out of four million workers in Ho Chi Minh City, only about two million people have signed labor contracts.
Among them, 400,000 employees are working in IZs, EPZs, and hi-tech zones while the rest are workers in enterprises outside IZs and EPZs.
Therefore, according to the content submitted by the Government to the National Assembly, the beneficiaries of the support are employees who are working in industrial zones, EPZs, and key economic zones fueling unfairness.
In addition, it is necessary to support tax policies, administrative procedures related to housing policies for employees, set aside a certain percentage of land in areas with a large number of factories and enterprises for investment, or local authorities invest in worker housing and then leases it to the employees.
Enterprises can rent out government-built houses for their employees. These policies are long-term and really come to life, creating a driving force for development and improving the investment rate of the society, said Ms. Thuy.
Director Hien said the State should support loans with preferential interest rates as well as have policies to convert agricultural land into residential land and simplify formalities for building houses to help businesses outside IZs and EPZs build accommodation for workers.
According to him, the Government needs to divide it into two small packages including a package to directly support rent for workers and another support package for businesses to build accommodation for workers.