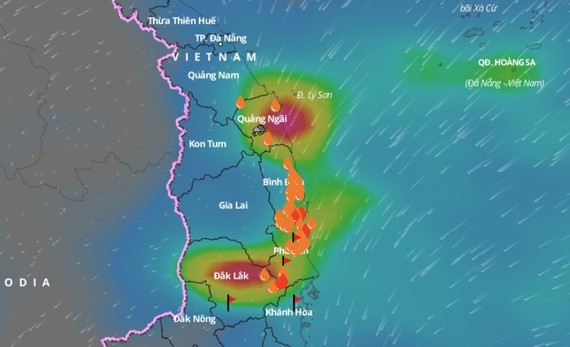 Heavy rains in Central Coast provinces still develop complicatedly. (Photo: SGGP)
According to the National Center for Hydro-Meteorological Forecasting, on the night of November 13, the area from Thua Thien - Hue to Khanh Hoa provinces had moderate and heavy rains. In Binh Dinh and Phu Yen provinces alone, there were heavy and torrential rains, with an average rainfall of 80-200 mm and over 200 mm in some places, such as An Nhon in Binh Dinh Province with 309.2 mm, Song Hinh 4 in Phu Yen Province with 231.1 mm, and Cat Hung in Binh Dinh Province with 218.4 mm.

It is forecasted that, from November 14 to 15, the average rainfall in Quang Nam, Quang Ngai, Binh Dinh, and Phu Yen provinces will be from 100 mm to 180 mm, with some places over 280 mm, in Thua Thien - Hue, Da Nang, Khanh Hoa provinces from 60 mm to 100 mm, with some areas over 120 mm. The Central Highlands and the South will have showers and thunderstorms, with moderate and heavy rains locally with a rainfall of 20-50 mm per 24 hours and over 70 mm per 24 hours in some places. During thunderstorms, there is a possibility of tornadoes, lightning, hail, and strong gusts of wind. There is a risk of flash floods and landslides in mountainous areas and local flooding in low-lying areas and along rivers.

From November 16, heavy rain in the areas from Thua Thien - Hue to Khanh Hoa will still be complicated. Warning of disaster risk due to heavy rain, whirlwind, lightning, and hail: Level 1.