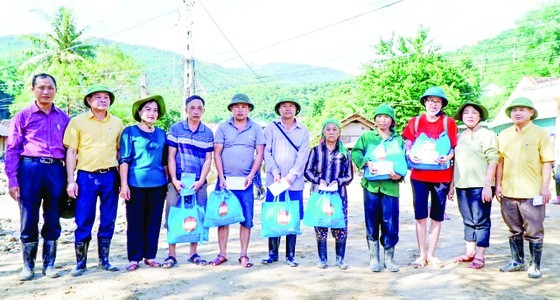 On the occasion, the delegation offered Nghe An Province VND2 billion (US$ 83,636) in cash, seven tons of rice, 140 boxes of instant noodles along with other essential stuff contributing to helping the province recover from floods.
Besides, on the same day, the working delegation also paid a visit to Ky Son District to send encouragement to families and households affected by the recent flooding in the hamlets of Hoa Son, Son Ha, Binh Son in Ta Ca Commune and to offer 30 gifts worth VND2 million (US$83.63) each to 30 households who were hugely suffered from loss and damage.

The recent superstorm Noru caused severe damages in Nghe An Province with eight deaths, 334 damaged houses, over 13,300 hectares of rice and agricultural products being affected, and more than 296,000 poultries and livestock being swept away and dead. Particularly, the storm had swept away and destroyed 55 houses and damaged 141 others, forcing 36 households to promptly evacuate.