On the same day, the Ministry of Transport said that the agency had drafted the sub-projects for Belt Road No.3 and Belt Road No.4 through Ho Chi Minh City to detail tasks for relevant localities.

As for the Belt Road No.3 Project with a total length of over 92 kilometers, it is necessary to promptly invest VND54,292 billion (US$2.4 billion) to build the 76-kilometer long section of the project in this period. Of which, Tan Van – Nhon Trach section has its length of 8.75 kilometers and a total investment of VND6.9 trillion (US$302 million) being implemented by the Ministry of Transport. 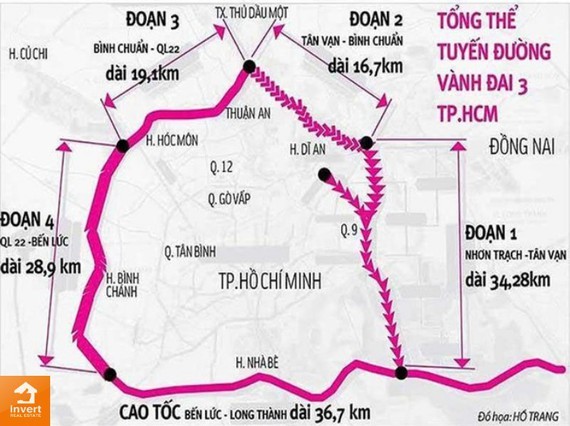 Tan Van – Nhon Trach section had been signed an ODA loan agreement with South Korea. Dong Nai Province and HCMC were assigned to implement site clearance works, study and propose the investment plan for the remaining 19.65-kilometer-long route with a total capital of VND14.8 trillion (US$643 million).
Regarding the 19-kilometer long section of Binh Chuan – National Highway No.22, Binh Duong Province and Ho Chi Minh City were assigned to perform investment and construction with the total funds of VND17 trillion (US$739 million).

Ho Chi Minh City and Long An Province are responsible for proposing the project to build the 29-kilometer-long section of National Highway No.22 – Ben Luc with a total investment of VND18 trillion (US$782 million).