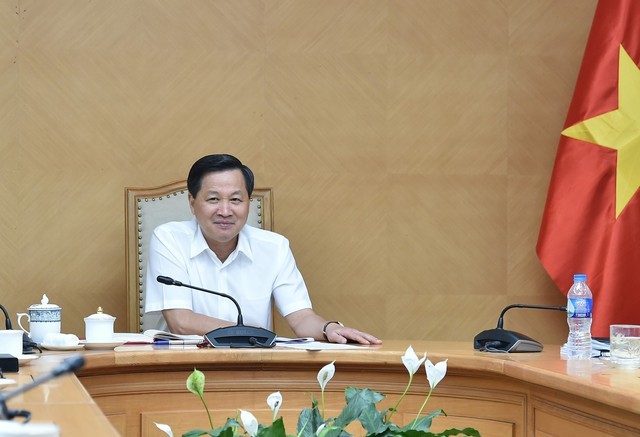 Deputy Prime Minister Le MInh Khai speaks at the event. The disbursement of the interest rate support program has remained limited after nearly three months of implementation. — Photo baochinhphu.vn
Deputy Prime Minister Le MInh Khai on Wednesday ordered agencies to solve problems arising during the implementation of the Government’s 2-per-cent interest rate support program so as to speed up the policy.
The move was made after authorities reported the disbursement of the VND40 trillion program has remained limited after nearly three months of implementation.
During a meeting on Wednesday, the State Bank of Vietnam (SBV) reported commercial banks lent nearly VND4.1 trillion to nearly 550 customers under the program, of which VND1.1 trillion was interest rate aid.
Commercial banks attributed the limited disbursement to a number of difficulties, such as determining beneficiaries of the program. The banks explained many production and business households borrow bank loans but do not register as business households, so they are not eligible for the support.
To speed up the program’s disbursement to support businesses in accordance with the law, at the meeting, the Deputy PM asked the SBV, ministries of Finance, Planning and Investment, and Justice, as well as the Government’s Office to review regulations related to industries, beneficiaries and lending conditions of the program to promptly adjust or propose more feasible and effective measures to competent authorities.
He assigned the SBV to organise a conference with the participation of commercial banks next week to receive feedback from them. Other relevant ministries, including Planning and Investment, Finance and Justice, will also have to send officials to attend the event to guide and explain the program’s regulations to commercial banks.
The SBV must also soon set up a number of working delegations with the participation of relevant ministries and sectors to survey the program’s implementation results of commercial banks to promptly take measures to handle difficulties and obstacles raised during the implementation.
In addition, the SBV must continually coordinate with relevant agencies to promote the program so as to make access to the support policy effective for beneficiaries in accordance with legal regulations.
The Government in May this year issued Decree No. 31/2022/NĐ-CP on the interest rate support program from the State budget for loans of enterprises. The program, which is a large-scale policy with the participation of many commercial banks, uses the State budget to help reduce the borrowing costs for enterprises, cooperatives and business households in order to help them overcome difficulties to stabilise and develop production and business. Therefore, the policy implementation must ensure fairness, publicity and transparency to identify the right beneficiaries.
The beneficiaries of the policy are enterprises, cooperatives and business households in aviation, transportation, warehousing, tourism, accommodation and catering services, education, agriculture, forestry, fishery, manufacturing and processing industry, software and computer programming, information services, and developers of social and worker housing.
Under the policy, the State budget will fully and promptly allocate funds for interest rate support of 2 per cent per year for commercial banks to provide loans to customers.
Commercial banks will stop supporting interest rates after December 31 next year or when the funding source runs out, whichever comes first.
The interest rate support period is from the date of loan disbursement to the time when the customers pay off the loan principal and/or interest as agreed between the commercial banks and the customers, but not exceeding December 31 next year.