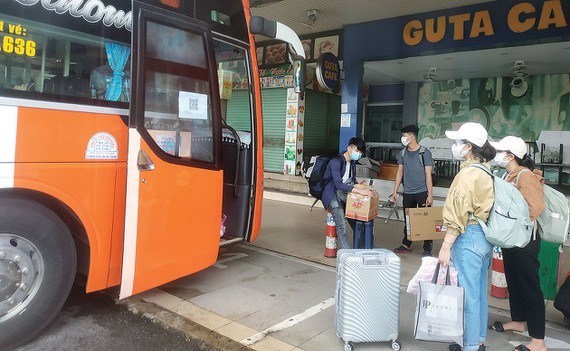 Passengers in the Eastern Bus Station  in HCMC (Photo: SGGP)
After the release of the Government’s resolution No. 128/NQ-CP on the Interim Regulation on safe and flexible adaptation and effective control over the Covid-19 pandemic, many provinces and cities have removed Covid-19 border to facilitate travel between localities.

On October 20, the number of passengers sharply increased in the Eastern Bus Station in Binh Thanh District while travel operators including Kumho, Chin Nghia, Toan Thang and Phuong Trang started selling bus tickets.
Coaches transporting travelers among eight provinces and cities have been allowed to resume operation, including 40 trips started in HCMC and 34 coming from other localities to the Eastern Bus Station, according to the terminal.
Other companies in the Western Bus Station, such as Toan Thang, Huynh Gia, Phuong Trang, Phu Vinh Long have also resumed their operation.
Deputy Director of the Department of Transport of Vinh Long Province said that there were only six coaches carrying a total number of 150 passengers in the first three days after the implementation of a pilot plan on a route connecting the province and HCMC. Fear of traveling still present amongst passengers.
At the Cho Dem Covid-19 control station on HCMC-Trung Luong expressway, there were hundreds of private vehicles returning to HCMC for work from Mekong Delta provinces while tens of buses carrying workers and a lot of people on motorbikes carried out health declaration and displayed essential papers at the Tan Tuc checkpoint located in the border area between Long An and HCMC.

A checkpoint in Vinh Binh Bridge, a border area among Binh Duong, Thu Duc City and HCMC
Meanwhile the Southeastern province of Dong Nai has maintained the operation of more than 10 Covid-19 checkpoints. Travelers entering the province are required to receive at least one dose of the Covid-19 vaccine or be patients who recovered from Covid-19 within six months and have negative test result for Covid-19 taken within 72 hours.
Traffic in the border areas among Binh Duong Province, Thu Duc City and HCMC is easier now than it ever has been while checkpoints between HCMC and Tay Ninh Province have been maintained to control and monitor travelers.
Eight subsidized bus routes of HCMC will be resumed operation starting on October 25, including 14 (Eastern Bus Station - Western Bus Station), 20 (Ben Thanh-Nha Be), 27 (Saigon bus station-An Suong bus station), 29 (Cat Lai ferry station - Thu Duc Agriculture Wholesale Market) ,141 (BCR tourist area-Linh Trung Industrial Park 2),65 (Ben Thanh bus station-An Suong bus station),74 (An Suong bus station-Cu Chi bus station) and 79 (Cu Chi bus station-Ben Duoc Temple).