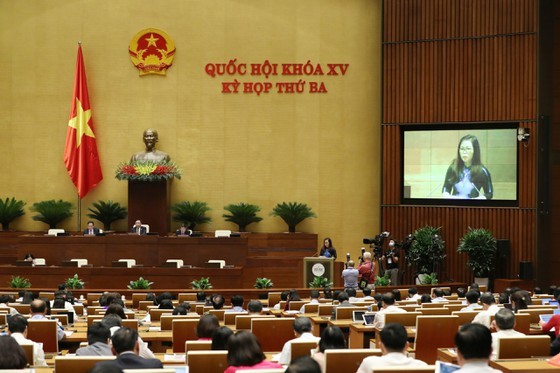 At the NA's session (Photo: SGGP)
At the National Assembly session on the afternoon of May 24, Minister of Planning and Investment Nguyen Chi Dung, authorized by the Prime Minister, presented a report on the draft resolution on piloting a number of mechanisms and policies for the South-Central Province of Khanh Hoa’s development.
Generally, all session participants voiced their support for a resolution about piloting a number of specific mechanisms and policies for the development of Khanh Hoa Province, but it is required to ensure security and defense issues and to have technical barriers with foreign investors. In particular, foreign investors are not allowed to co-own ports, airports, and some other locations.
In particular, in order to create a breakthrough and exploit the potential and advantages of the Van Phong Economic Zone, the draft stipulated mechanisms and policies to attract strategic investors in priority sectors and fields. develop provisions in Resolution No. 09-NQ/TW of the Politburo.
Deputy Chairman of the Finance and Budget Committee of the National Assembly Vu Thi Luu Mai reported the verification of the draft resolution. She stated that the promulgation of the Resolution on piloting a number of specific mechanisms and policies Khanh Hoa Province development is necessary because the province’s development has an important role in maintaining the country's sovereignty over sea and islands and regional spillover effects. 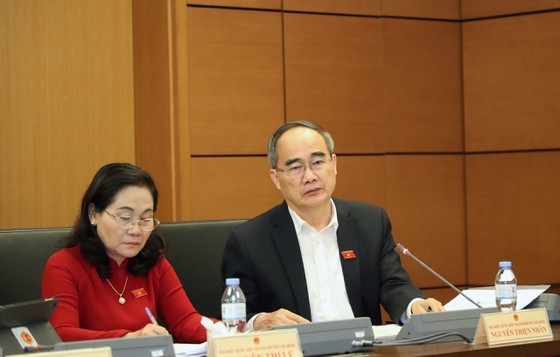 Deputy Nguyen Thien Nhan ( R) at the NA's session (Photo: SGGP)
Regarding policies similar to other localities that have been approved by the National Assembly, the People's Committee basically agreed with the policies on financial management, budget, and planning of land similar to other localities.
Regarding a number of new policies, especially on the development of the Van Phong Economic Zone, most members of the Finance Committee said that the policy of attracting strategic investors to Van Phong Economic Zone is parallel with the Resolution 09 of the Politburo.
However, the selection of investors needs to strictly comply with regulations because the Van Phong Economic Zone as well as Khanh Hoa Province has an important position in terms of national defense and security.
It is suggested that investment incentives are not specified for the construction of commercial centers, urban areas, tourist areas, and golf courses in Van Phong Economic Zone because this is not in the priority investment field.
Regarding the development of marine aquaculture within the marine area managed by Khanh Hoa Province, members of the NA’s Finance and Budget Committee agreed to adopt a policy to develop the marine economy, including the development of offshore aquaculture in order to promote specific advantages and this is also the orientation stated in Resolution 09, making an important contribution to maintaining sovereignty over sea and islands. Along with incentives, there should be strict control policies in the implementation.
In addition, it is necessary to strictly regulate the withdrawal of incentives, permits, and termination of operations in cases where the marine area is assigned to aquaculture but investors don't comply with the regulations of relevant laws. regulations prohibiting the transfer or subletting or use of the assigned or licensed marine area to foreigners. 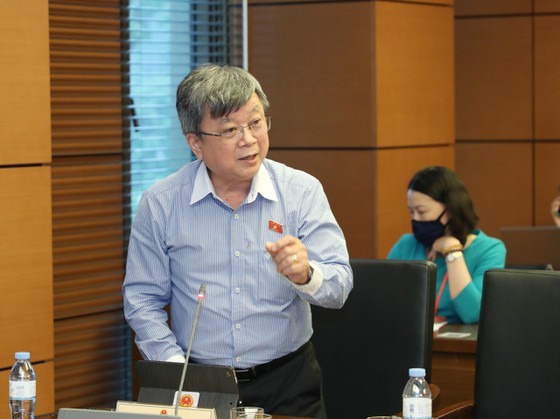 Deputy Truong Trong Nghia at the NA's session (Photo: SGGP)
Discussing this content, deputies supported the resolution but noted the issue of ensuring the country's sovereignty over sea and islands, ensuring national defense and security when assigning sea areas, and licensing aquaculture at sea, because Khanh Hoa is home to Truong Sa archipelago and Cam Ranh military base.
Therefore, there should be technical barriers when implementing this policy. When implementing mechanisms and policies to develop Van Phong Economic Zone, it is necessary to ensure strict regulations in attracting strategic investors.
Deputy Truong Trong Nghia from Ho Chi Minh City supported having a specific mechanism for Khanh Hoa Province because it is a specific province, but the requirements must be commensurate with the specific position of Khanh Hoa. But it is imperative to ensure national defense and security and sovereignty over the sea and islands.
He wondered about the development of the Van Phong Economic Zone adding that it is necessary to clearly define the criteria for strategic investors, both in terms of investment capital and investment time.
He asked the drafting agency to compile statistics on other points of mechanisms and policies to attract strategic investors to develop the Van Phong Economic Zone, which is different from current regulations.
In his opinion, it is necessary to clarify how the port, port area, general port, and special-use port with an investment capital of VND2,300 billion (US$98.5 million) or more belonging to the first-class seaport of a strategic investor in Van Phong Economic Zone to the national security.
The provincial People's Committee has approved investment policies for investment projects on the construction and business of airports, and investment in harbors and port areas in special seaports.