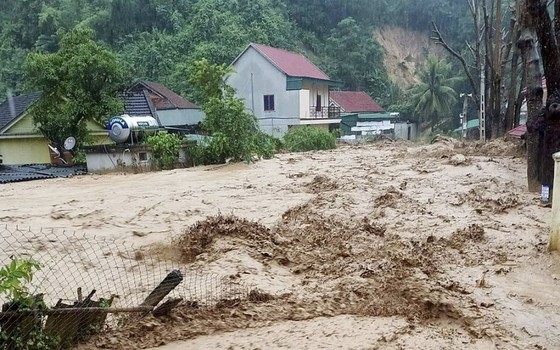 The flash flood also swept away 15 houses, mainly in Ta Ca Commune, flooded 40 houses, and swept away two cars. The National Highway 7A, the section passing through Block 1 to Block 8 in Muong Xen Town, was flooded deeply in mud. Vehicles cannot pass through this stretch of road.

Currently, the water has receded. However, because of the power outage and heavy rains, the communication and recovery work is facing difficulties. 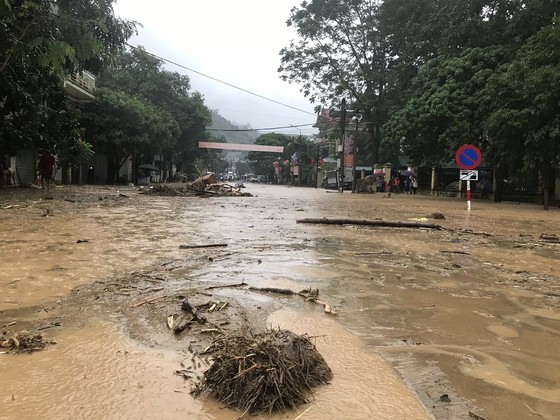 Mud and soil poured into Muong Xen Town in Ky Son District. (Photo: SGGP)
Earlier, Mr. Tho Ba Re, Vice Chairman of the People's Committee of Ky Son highland district in Nghe An Province, on the morning of October 2, made a quick report that a large wave of floods hit some areas, causing heavy damage and flooding in many places that early morning.

Around 1 a.m., a flood suddenly poured in and swept through Muong Xen Town in Ky Son District. At about 2 a.m., another wave of flood swept through Hoa Son Village in Ta Ca Commune.

Mr. Tho Ba Re added that according to the initial assessment, the flash flood was caused by water from Laos.

Lieutenant Colonel Le Huy Bay, Head of La Ee Border Guard Station in Nam Giang District in Quang Nam Province, on October 2, said that the border guard had found the body of a young man who was swept away when trying to cross the Bung River. 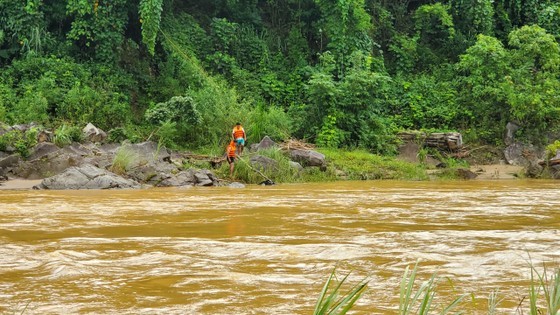 The victim's body is discovered in Palan Village, La Ee Commune, about 15 km from the place of the accident. (Photo: SGGP)
Accordingly, at 4.30 p.m. on September 29, a patrol team of La Ee Border Guard Station saw three people intending to wade across the Bung River in La Ee Commune (downstream of the Bung River 2 hydroelectric dam) when the Bung River 2 Hydropower Plant was discharging floodwater.

When the patrol team approached, these three people said that at 2 p.m. on the same day, Pha A Thanh, 25, H'Mong ethnic in Dao San Commune, Phong Tho District in Lai Chau Province, their companion, was swept away by the water while trying to cross the Bung River. These people searched along the Bung River for more than 1km but could not find him.

At 7.30 a.m. this morning, the victim's body was discovered in Palan Village, La Ee Commune, about 15 km from the place of the accident.