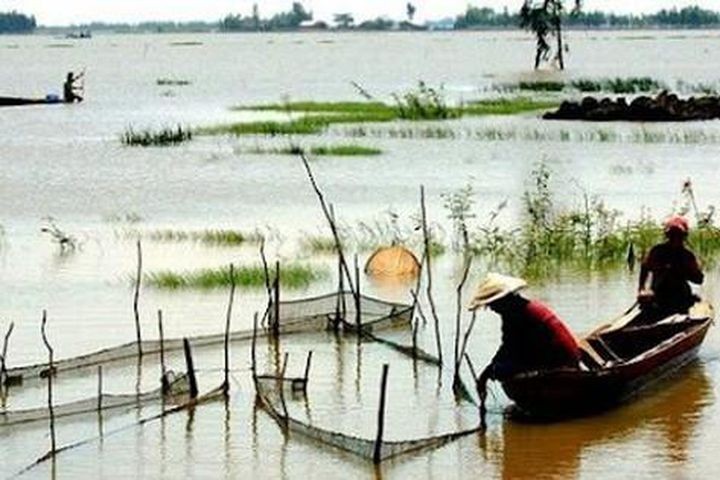 The late flooding season has affected the lives of local people in the Mekong Delta region. (Photo: SGGP)
Farmers of Thuong Phuoc 1 Commune in Dong Thap Province’s Hong Ngu District said that floods from the upstream were late this year. As of now, there is not much floodwater that overflows into paddy fields. In addition, the late flood has resulted in fish decline impacting on the local livelihoods.

Fishers in An Giang Province’s Tinh Bien District and Dong Thap Province’s Hong Ngu District aslo expressed their disappointment at the late flooding, leading to a fall by half of the river fisheries.
According to the Mekong River Commission (MRC)’s report, the record-low water level has been caused by the water storage of dams, especially the China’s Nuozhadu dam, and low rainfall in the Mekong River downstream. The rainfall last week added to a slight increase in water levels of the Tonle Sap Lake in Cambodia but the volume of water in the lake is still below the average level by two meters, said Ph.D. Nguyen Huu Thien, an expert on Mekong Delta ecology.
In recent days, the high tide has flooded many streets in residential areas along the Hau and Can Tho rivers in Can Tho City. According to the forecast, the water level will reach the third alarm level by 1.95-2 meters in coming days.

Dry seasons might last to the rainy season in next years because hydropower reservoirs have retained a large volume of water in the beginning of the year’s rainy season, causing late flooding season as in 2021. The arrival time of flooding and the water level have affected the lives of local people, said Ph.D. Nguyen Huu Thien.
The local authorities and farmers should pay attention to dealing with drought and saltwater intrusion that will move further inland when the tide recedes to adapt to saline conditions and climate change, he added.