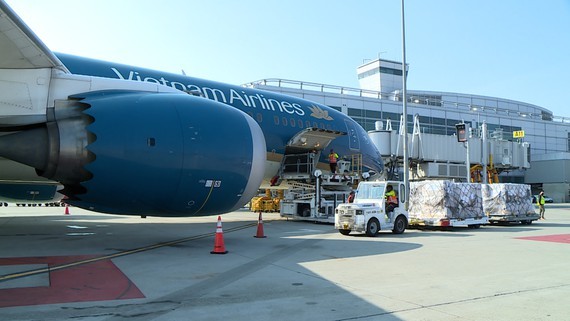 The batch of medical products is brought on the plane at San Francisco International Airport.
The shipment of Covid-19 medical equipment worth about US$ 1 million includes 250 oxygen concentrator machines, five ventilators, 9,000 Covid-19 antigen rapid test kits, 600 protective suits, 2,500 face shields, 60,000 medical masks that was donated by the Vietnamese American community in response to the call of the Consulate General of Vietnam in San Francisco to support the country in the combat against Covid-19.

The Ministry of Health received the donation to distribute these Covid supplies to localities to fight against the virus.
The flight was operated by the national flag carrier, Vietnam Airlines (VNA) that has officially received an allowance from the Transportation Security Administration (TSA), an agency of the US Department of Homeland Security to operate 12 repatriation flights to bring home Vietnamese citizens in 2021.
It was also VNA’s first flight that was granted a permit to carry out commodities between the two countries by the United States Department of Transportation (USDOT or DOT), the Transportation Security Administration (TSA) and the Federal Aviation Administration (FAA).
VNA urgently worked with the Vietnamese Ministry of Foreign Affairs, the State Committee for Overseas Vietnamese (OV) Affairs, the U.S. Embassy in Hanoi and the Consulate General of Vietnam in San Francisco and American competent agencies within three days. The carrier received an approval to transport the batch of medical products by eight hours before the departure on August 23.