So farmers have not been dumping the lychees in the rivers as rumors say.

Updating the consumption of lychees in six large-scale growing districts, including Luc Ngan, Luc Nam, Tan Yen, Lang Giang, Son Dong and Yen The, the province People’ s Committee said that  as of June 20, the total output of lychee consumed in the province has reached 125,630 tons with a total revenue of VND 3,411.4 billion (US$148).

Of which, the direct turnover from the fruit was VND 2,046.8 billion and the extra sum of more than VND 1,364 billion was from supporting services.

After the harvest on a total area of 28,658ha of lychees across Vietnam, until June 19, businesses and traders inside and outside the country have bought and exported to the Chinese market about 36,500 tons of lychees, the turnover was estimated US$64.1 million.

There have been 150 Chinese traders and more than 1,000 Vietnamese traders to buy lychees to export to China as per a survey on the area of Luc Ngan district until June 20. 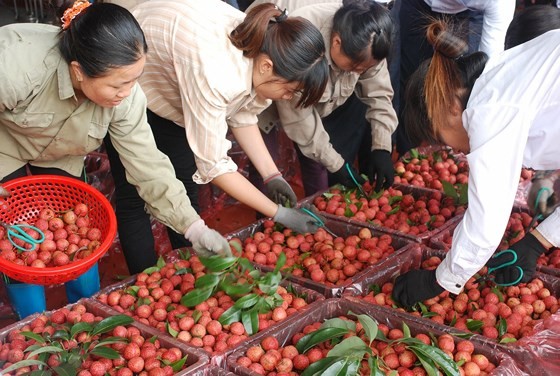 It was expected that on June 20, another company will export about 200 tons of lychees to Thailand via aviation.

To avoid the situation that small traders mix or sell low quality lychees but "borrow" the trade mark of Thanh Ha and Luc Ngan, from June 10 up to now, at the Agricultural Exhibition Center in Hanoi, the Ministry of Agriculture and Rural Development held “ lychee week “to introduce the brand of genuine lychees for consumers.

According to Mr. Nguyen Xuan Cuong, the total cultivating area of lychees in the North is over 60,000ha and this year witnesses a big harvest of lychees that has never been seen in many years.

So far, more than 50% of this year output has been consumed, stated he.