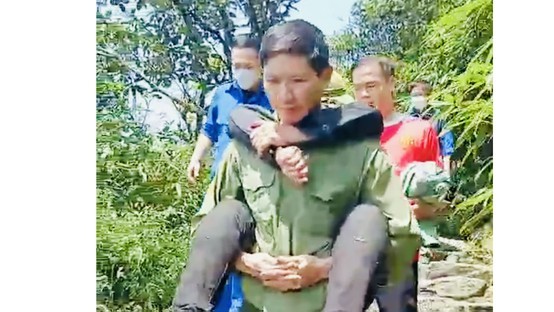 A rescuer carries the elderly to safe place
On the afternoon of May 3, in a talk with a reporter from Sai Gon Giai Phong Online Newspaper, Mr. Le Tien Dung, Head of Yen Tu National Forest and Monuments Management Board, said that the unit had just searched and rescued a tourist hailing from Hanoi who fell into the abyss after seven days.
According to Mr. Le Tien Dung, while patrolling, officers of the Yen Tu National Forest and Monuments management force heard a cry for help coming from below the area near Dong pagoda area in Yen Tu premises around 9:15 on May 3. Soon, rescuers were swinging down into the abyss suddenly discovering a woman below the cliff and they were carrying out rescue work. Because the woman victim was about a 30-m deep site that was covered with trees, rescuers spent more than an hour reaching and taking the victim to a safe area.
At the time, the female victim was in a state of fatigue, hunger, and exhaustion. Rescuers were immediately giving her first aid and successfully brought the victim down the mountain.
According to the initial information, the female victim born in 1963 fell into a deep pool in the area of Dong Pagoda on April 27 and was found on the morning of May 3, or in another word, she had been in the abyss for about seven days.
According to the victim, she went to Quang Ninh Province alone and went to the Dong pagoda to worship the Buddha. When she went down a section, she suddenly felt a little tired, so she sat down to rest near the railings of the Dong pagoda.
Because she suddenly fell in blood pressure causing dizziness and fainting, she fell into the abyss about 30 meters below. Fortunately, Mrs. L. fell into an area with many trees, so there was no serious injury…
The female remembered because these days, the area of Dong Pagoda has a strong wind, so even though she called for help many times, no one heard her cry for help.
During her days at the bottom of the cliff, she managed to cling to the trunk of a tree, but her efforts were unrewarded as she fell down more. Worse, she fell and hit her head, she passed out. When she woke up and found herself in a deep abyss, the old woman panicked and continued to call for help. But because the area was deserted, the mountainside was deep, and due to heavy rain and strong wind, no one heard her cry for help. 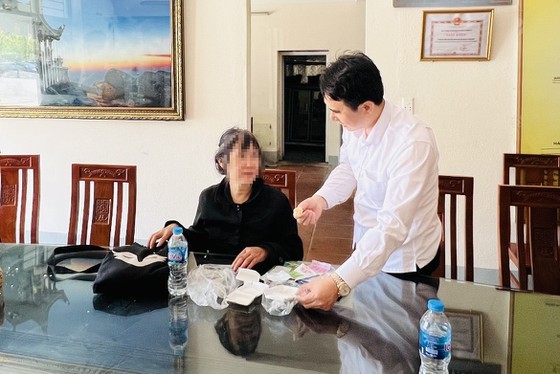 The elderly woman eats some cakes at the office of the Yen Tu National Forest and Monuments Management Board
Luckily, when she fell, there were a few rice cakes and a bottle of water in her bag. She ate more fern leaves to endure. To combat the cold, hunger, and thirst, she put on all the raincoats and plastic bags she could find around the place where she fell.
According to the leader of the Yen Tu National Forest and Monuments Management Board, the location where the tourist fell was hundreds of meters deep, but fortunately, when the elderly woman fell, there were many trees below, so the victim didn’t die but stayed at a depth of 30 meters. After many days of heavy rain and wind, the sky is clear today, so the patrollers heard the cry for help from the bottom of the cliff.
The victim was able to drink some milk, take tonics, and was able to communicate again after being rescued. According to Mr. Le Tien Dung, the victim has very good survival skills and her survival can be considered a miracle.
Mr. Le Tien Dung also added that the location of the fallen tourist is a place that ordinary tourists are not allowed to enter because many years ago, a few tourists were also slipping and falling into the abyss; hence, the management board made railings, installed warning signs as well as use loudspeakers to warn tourists from entering the area.
The rescue team also contacted the victim's family.