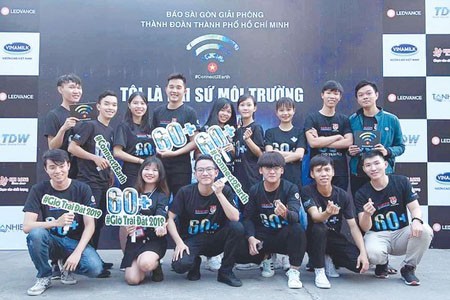 Various activities in Earth Hour Campaign are held online. (Photo: SGGP)
‘Speak up for Nature’ is the theme of this year’s Earth Hour, aiming at raising the public’s awareness about the alarming state of environment quality, the shocking biodiversity reduction, and the too frequent forest fires globally at present.

According to World Wide Fund for Nature (WWF), in the next few months, representatives of several nations will gather for the 15th meeting of the Conference of the Parties (COP 15) on the Convention on Biological Diversity (CBD) in Kunming, China. They will discuss international actions in the next 10 years to save biodiversity.

Joining hand in this year’s Earth Hour, people can create a voice powerful enough for world leaders in the meeting to sign agreements to protect the nature on our planet and to help it recover from severe injuries so far.

The first program – Green Footprint – is an online walking project using Strava app on mobile smart devices to count the quantity of steps in walking, jogging, bicycle riding activities of participants over the length of 60km. Each step represent repeats the yearning voice of partakers to protect the environment. The program attracted more than 1,000 people only after 4 days launching. The final data will be announced on March 27.

Another program is Green Dance. The common theme song of Earth Hour Campaign is choreographed into a flashmob dances. They are recorded and then uploaded onto the official website and YouTube channel of Earth Hour Vietnam. The clips are sent to the organization board before March 24. Volunteers are also encouraged to upload their dance onto their own Facebook page and TikTok.

Participants in the campaign are asked to perform and record suitable actions in their neighborhoods to protect the environment. Feasible and innovative actions will be shared publicly on the Facebook page of the organization board. 80,000 people have registered for this interesting activity.

The main activity – Light Out – will be held from 8pm to 9pm on March 27 nationwide. Agencies, organisations, and individuals are encouraged to ‘turn off lights and unnecessary electrical equipment’ at that time. After that is the show of outstanding flashmob dances and the online as well as offline interviews with media ambassadors.

In this 13th year taking part in the meaningful Earth Hour Campaign, Vietnam hopes to join hands with over 200 countries to create positive results in raising the public’s awareness about environment protection and sustainable development.