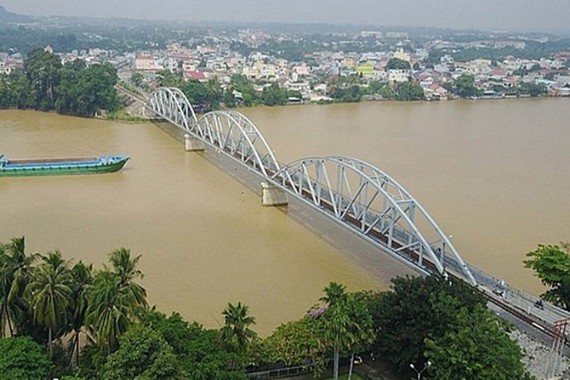 The total investment cost of these two projects is expected to be around VND 5,200 bn, of which the cost for ground clearance will be VND 3,950 bn for nearly 1,000 organizations and households that will be affected. Once complete, it will serve almost 1.3 million people as an urban landscape and a community living space, while also promoting social-economic development in the province.

Currently, the main traffic axis connecting National Highway 1A to National Highway 1K via Hiep Hoa Bridge and An Hao Bridge is undergoing local traffic congestion. Hence, Dong Nai province hopes that the formation of a new riverside traffic axis will help reduce traffic jams in the center of Bien Hoa City, and make it easy to connect with major roads such as National Highway 1A, 1K, the My Phuoc-Tan Van Expressway, and also promote socio-economic development in the entire Southeast economic region.

In addition, the existing houses along the river that often discharge their waste directly into the riverbed, causing massive water pollution, will be controlled. Therefore, if the parks are built, they will help create a buffer between the river and residential areas, thereby protecting the environment and water resources of Dong Nai river.

From the planning and development of major cities in the world, we can learn that in the past, capitals of countries, and major cities in Europe, Asia, Africa and America were mostly close to rivers and water bodies. The River Thames in London is 330 km long, and since the 1980s, the Riverside Industrial Zones (IZs) began to give way to apartment buildings and offices, promenades, parks, and has created iconic buildings such as the Millenium Dome, or complexes like the Canary Warf, that help create a distinctive identity for the riverside area and also stimulate economic development. With hundreds of environmental improvement projects that followed, the River Thames has turned into an important cultural asset that reflects the history of London. In the US, since the 1950s, the Hudson River in New York City has been considered the first riverside megacity in the world, acting as a transport and commercial corridor.

Vietnam’s capital Hanoi City is also aiming to create urban areas on two sides of the Red River, to create a cultural landscape along the West Lake, which will combine conservation of valuable works and monuments, as well as modern development. The Red River urban zone project will be introduced by next June.

In Dong Nai province, Mr. Cao Tien Dung, Chairman of the Provincial People's Committee, said that in the planning of the province for the period 2001 to 2030, the area along Dong Nai River, from the South of Bien Hoa City to Long Thanh and Nhon Trach districts, will be planned gradually to form riverside urban areas, creating distinctive features for urban architecture, and also creating a living environment to improve the quality of life for the people, while at the same time attracting more investors for development projects in the area.

However, to highlight the riverside landscape, it is impossible not to have high-rise buildings along the river or in islets such as Pho Islet in Hiep Hoa Ward, Ba Xe Islet in Bien Hoa City, or Ong Con Islet in Nhon Trach district. The planning and construction of high-rise buildings along the riverside will also help save land for parks, increase utility for residents of an industrial city like Bien Hoa and thereby contribute to a harmonious living environment for people, especially workers and employees working in industrial zones.

The Thu Thiem peninsula in district 2, and the corridor along the Saigon River in District 1 of Ho Chi Minh City are considered priceless land areas. Although, even Pho Islet and the Dong Nai river corridor will have similar value if they are properly planned and developed. In the same way, the development along Dong Nai river will be an invaluable natural asset, and also serve the people of the entire Southeast region.