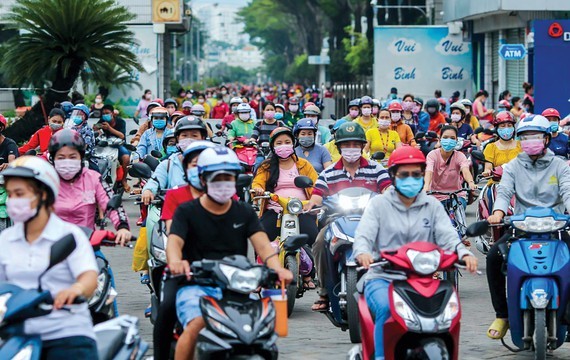 This proves that Vietnam's economic structure is prone to instability. Essential housing for workers is not guaranteed, and there is a dire need to resolve this housing problem if the production chain is to once again restart to lift the economy after months of lockdown due to the Covid-19 pandemic.

Over the last many years we have made great efforts to promote industrialization and urbanization. As is seen, the inflow of workers relocating from rural to urban areas in order to work in industrial zones (IZ) and export processing zones (EPZ), has been an important driving force for Vietnam's economy and subsequent development.

However, this recent shift creates instability for workers living in megacities and large construction sites. Currently, under the abnormal pandemic conditions, there has been an influx of workers returning back to their hometowns, of which number only some will return back to the big cities and IZs to resume work, with many still choosing to stay back in the countryside. One of the reasons why workers choose and prefer to return to their hometowns is because of lack of proper accommodation and uncomfortable living conditions in urban areas, for themselves as well as their families.

Since 2014, the Ministry of Construction has introduced an ideal model for accommodation and housing of workers in the category of social housing, which can receive support from the state budget capital in planning and construction. This was meant to encourage businesses to resolve the huge problem of housing for workers in big cities like Hanoi, Ho Chi Minh City, and some provinces undergoing rapid industrial development such as Bac Ninh, Thai Nguyen, Vinh Phuc, Dong Nai, Binh Duong, and Long An.

However, from actual policy making to realistic implementation of this scheme it has remained a distant dream. For this reason, a large number of low-income workers still have been unable to own a suitable roof over their heads in big cities, and continue to live in places that do not even have the minimum living facilities for them and their families.

Recently, the Ministry of Construction sent the People's Committee of all provinces and cities a document calling to strengthen housing development for workers in industrial zones and export processing zones, in order to ensure resumption of production activities. The ministry has proposed to supplement a credit package of about VND30,000 bn in the form of refinancing for social housing investors and worker housing in industrial parks and export processing zones.

However, the social housing projects, affordable housing schemes, or worker housing that have been deployed so far have not yet met this demand. One of the reasons why worker housing projects are difficult to implement is the low return on capital, and for this reason businesses are not interested in donating capital.

This calls for a new development strategy, which will not follow the earlier development plan of megacities or large construction sites. In past times, there was more focus on labor intensive industries and outsourcing industries rather than high-tech, high value added industries, which was unreasonable in the building of Hanoi and Ho Chi Minh City into large urban areas with links to nearby industrial zones.

This shows that, when focusing on labor-intensive industries with low added value, mainly outsourcing, it will create an overload on urban space and IZs, including the economy, society, and technology, and will create an unequal competition between Hanoi, Ho Chi Minh City, and other developing provinces and cities. It does not guarantee inclusive and pervasive development, because the growth and accumulation will focus more on IZs and big cities, leaving behind other provinces and cities.

Therefore, it is important that major commercial centers of the country such as Hanoi and Ho Chi Minh City should focus on high-tech industries, industries with greater added value, while labor-intensive industries and outsourcing should move to rural areas. This will ensure that industrial centers and large urban centers are not overloaded. It will also ensure a greener and healthier lifestyle and a more sustainable economy. If workers in big cities or IZs have an income of around VND7 to 10 mn a month, they still have to pay a lot for food, housing, and social services. However, if they live in the countryside, they can be self-sufficient in food and housing, and then with their current income they will be much happier.

Therefore, bringing industry to the countryside is the best way to develop the rural economy, narrowing the gap between urban and rural areas. By observing enterprises in the past it also shows that if the focus is only on cities and IZs, it will be very difficult for many enterprises. Enterprises can now disperse their production across several units in many provinces and cities. If there is a problem in one place, then another place will continue to produce and employees can still continue life without disruption.

This is also a challenge for Vietnam to restructure the economy in the direction of not focusing on production in big cities and IZs only. Satellite cities must be formed, bringing industry to the countryside, promoting rural development, integrating industry and agriculture, and bringing happiness to employees as well as sustainable development for businesses.

For businesses and industry to grow and develop and continue to attract a large workforce, it is absolutely essential to immediately solve the problem of where the workers will be accommodated, what type of social housing it will be, what worker houses will be like, and what State policies will support this project.

Together with businesses, employers, and workers, the State must jointly coordinate to build a conducive living environment for workers and employees, so that the place they go to work in is not just a place where they operate machinery. Rural areas have a relatively good ecological environment, so by bringing in industry, the countryside may well turn into a concrete tarmac. All effort must therefore be made to save the countryside into turning into an IZ, where both the environment and society will suffer.