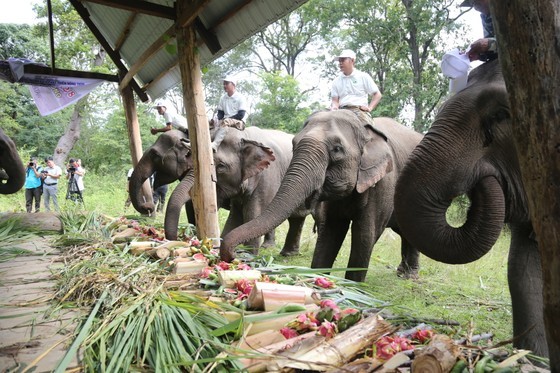 Elephants enjoy a "buffet" of fruit and vegetables marked its World Elephant Day.
World Elephant Day, observed on August 12, was created with the main objective of preserving and protecting this animal and seeking solutions to the problem of human-elephant conflict.
A project on elephant preservation in Dak Lak, Dong Nai and Nghe An was approved by the Government in 2006. Recently, in Decision No. 413/QD-TTg dated March 31, 2022, the Prime Minister agreed with the project’s adjustment. Under the decision, the elephant conservation plan will be implemented until the end of 2025.

Deputy Director General of the Vietnam Administration of Forestry (VNFOREST), Tran Quang Bao said that the country has successfully implemented tasks to manage human-elephant conflicts between elephants and people which often happened in 2009-2012. A wide range of solutions was carried out to prevent and mitigate human-elephant conflicts in the 2010-2020 period, but the self-healing ability and continuance of growth in the wild.

According to the Vietnam Administration of Forestry, many international organizations have continuously supported Vietnam to implement the Asian Elephant Protection (AEP) project that has been carried out in Dong Nai Province with the help of Dr. Pruthu Fernando, an expert on elephant behavior who has dedicated his life to protecting this larger-than-life species, Chairman of the Center for Conservation and Research (CCR) in Sri Lanka. 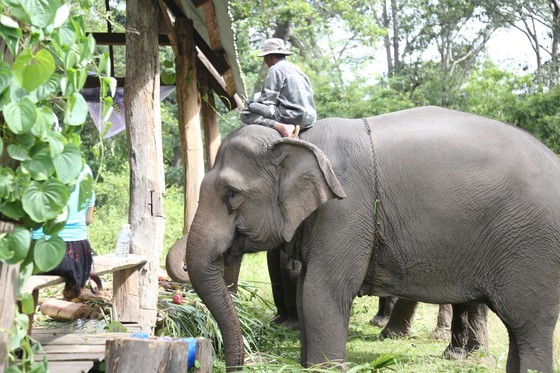 The wildlife surveillance system offered images recognizing the good status of subspecies of elephants in Dong Nai Province, said Dr. Pruthu Fernando.
Director of the Humane Society International (HIS) Viet Nam, Tham Hong Phuong Vietnam said that HIS and the Vietnam Administration of Forestry are promptly building a national plan on elephant conservation in Vietnam for the 2023-2032 period, with a vision to 2050.
Three species of elephants are currently recognized in the world, including the African bush elephant, the African forest elephant, and the Asian elephant. The Asian elephant is distributed in 13 countries, including Vietnam. Asian elephants are classified as Endangered (EN) on the IUCN Red List (2021) and on Appendix I of the Convention on International Trade in Endangered Species of Wild Fauna and Flora (CITES, 2019).
In Vietnam, Asian elephant populations are critically endangered with only about 60 domesticated species and more than 100 individuals remaining in the wild, scattered in the provinces of Dak Lak, Dong Nai and Nghe An. The Asian elephant is classified as Critically Endangered (CR) in the Vietnam Red Book (2007) and in Appendix I, List of endangered precious and rare species prioritized for protection under Decree 64/2019/ND-CP of the Government. 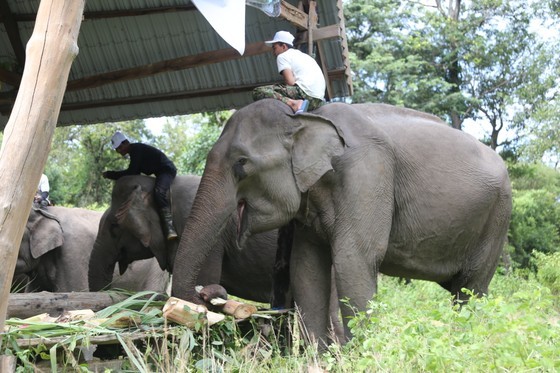 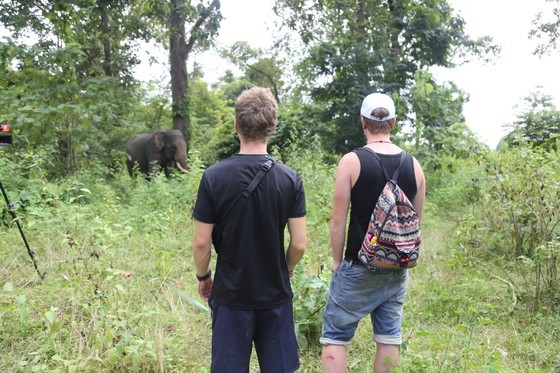 Elephant riding has been suspended in Dak Lak. Tourists are now only allowed to view them from a distance.