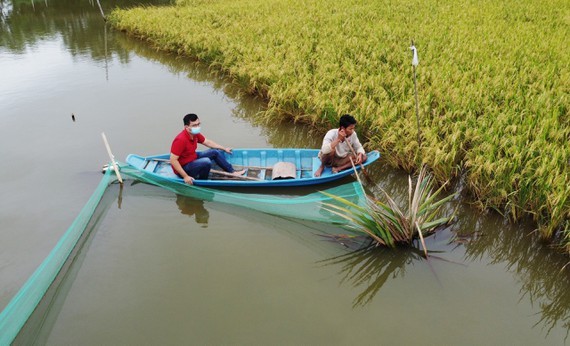 Young man Tram Minh Thuan  visits organic rice field
After graduating with a master's degree in food technology, young man Tram Minh Thuan worked for a time to gain experience, then returned to his hometown in Long Hiep Commune in Tra Cu District to establish Long Hiep cooperative. In 2018, the cooperative went into operation but faced many difficulties because people did not trust this model initially. Thanks to the support of local government and scores of organizations, the cooperative has gradually grown gaining residents’ trust.
The cooperative had 61 members, the farming area was about 50ha, now it has expanded to 120ha with 72 members, specializing in cultivating rice varieties OM 18, OM 5451, ST24, and ST25. The cooperatives focus on producing high-quality, organic rice, grown by exploiting the natural productive power of paddy fields without relying on pesticides or chemical fertilizers in combination with giant freshwater prawn farming.
According to the cooperative’s plan, normal rice is grown in a large field in Long Hiep commune, which is less susceptible to saline intrusion while organic rice is grown in an area of about 20 hectares in Dong Xuan commune in Duyen Hai District, where salinity is affected. In the saline area, the cooperative will also raise freshwater shrimp.
Organic rice cultivation has a lower yield than normal rice production, but many farmers prefer growing organic rice in saline areas because without using pesticides and chemical fertilizers, farmers can breed freshwater prawns. In addition, the cooperative promised to buy all organic rice according to the market price and pay farmers an extra of VND500 a kilogram of rice they buy.
According to Mr. Thuan, the cooperative will continue to invest in growing organic rice by expanding the area of organic rice cultivation and developing the clean rice supply chain. The expansion of organic rice cultivation area not only helps the cooperative to develop but also helps farmers not to be forced to sell rice at lower prices to traders.
In addition, the cooperative has constantly improved the value of clean rice production chains in saline areas with typical clean rice products and rich flavors investing in rice seeds and providing microbiological fertilizers for farmers to produce according to the technical process. 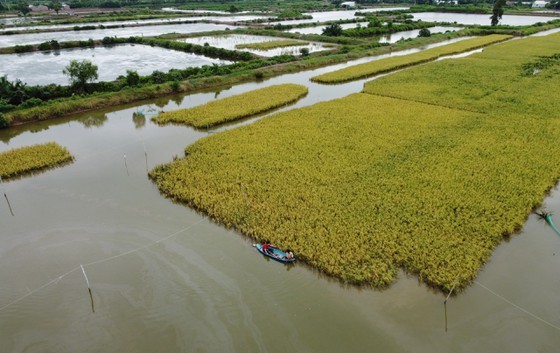 An aerial view of an organic rice field
This approach helps cooperative members reduce investment costs and increase productivity by 10-20 percent. The cooperative proposed to buy organic rice at high prices, farmers are more excited. Currently, the price of organic rice is about VND7,500 per kg widely consumed.
The profits of the cooperative have increased year by year, in 2021 alone, the revenue reached VND3.2 billion (US$139,708), bringing hundreds of millions of Vietnam dong in profit, said Thuan.
Thanks to his contributions to the province’s growth, Mr. Tram Minh Thuan has just been elected as Vice Chairman of the Young Entrepreneurs Association of Tra Vinh Province. In addition, Mr. Thuan also entered the top 100 outstanding young entrepreneurs nationwide in 2021 and was one of 56 typical young people to receive the 2020 Luong Dinh Cua Award.
Mr. Le Van Dong, Deputy Director of Tra Vinh Department of Agriculture and Rural Development, said that the Long Hiep cooperative is highly appreciated by functional sectors. From this effect, the province is continuing to replicate and develop many similar models in the area.

By Quoc An – Translated by Anh Quan