For the project to be completed in October this year as directed by the Prime Minister, during these days, on the construction site of the Trung Luong - My Thuan Expressway, there are about 1,500 workers and engineers, and nearly 1,000 vehicles are busy with continuous construction in three shifts.

Along the route, most of the bid packages have already finished the construction of the roadbed, many sections have been and are being covered with hot asphalt concrete C19. All the bridges on the route are basically completed. At the intersection of An Thai Trung in Cai Be District of Tien Giang Province, the main road of the first session of the new expressway has been completed. Adjacent to this intersection, there is a main road branch of Trung Luong - My Thuan Expressway and a byway on the right so that vehicles can go to Cai Be District in Tien Giang Province.

Sharing about the project progress at the construction site, Mr. Nguyen Tan Dong, General Director of Trung Luong - My Thuan BOT Joint Stock Company, who directly directs and regularly supervises at the construction site, said that after construction was temporarily suspended for vehicle circulation on the occasion of Lunar New Year, from the fourth day of the first month in the lunar calendar, all workers have returned to work normally. The company is striving to complete the project around September or October this year as directed by the Prime Minister. Contractors have been implementing 31 bid packages of construction and installation on the whole route, with the main road having basically been shaped. Up to this point, the project has been constructed more than 77 percent of the volume, and the main road with a length of more than 51 kilometers has been opened to traffic.

People of the Mekong Delta have been longing for information on the construction progress of the Trung Luong - My Thuan Expressway, especially the residents of Tien Giang Province. Because the NH1 route running through Tien Giang Province is currently heavily overloaded. Many sections, especially the sections across the bridges, which were built many decades ago with only two lanes, are always congested on weekends or holidays. Many people living near the project area often go to the construction site to monitor the contractors, hoping it to open to traffic soon. Mr. Cao Van Binh, 74, in Chau Thanh District, said that if this road is put into use on the occasion of Liberation Day and Labor Day, people would be very happy. They had been longing for this road. 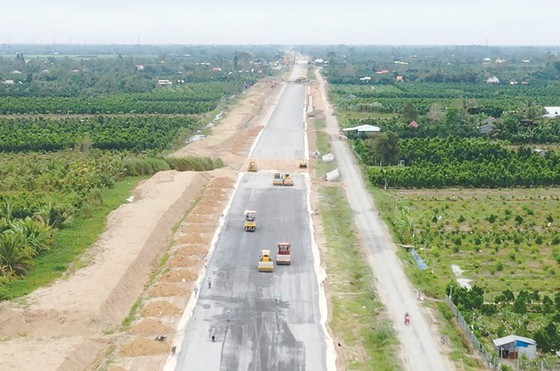 A section of the Trung Luong - My Thuan Expressway is under construction. (Photo: SGGP)
Mr. Ho Minh Hoang, Chairman of Deo Ca Group, cum Chairman of the Board of Directors of Trung Luong - My Thuan BOT Joint Stock Company, said that the project was merely under trial instead of opening to traffic to put into use. According to the contract, the project will be put into use by the end of 2021. Therefore, the project is unlikely to be used for vehicle traffic on the upcoming Liberation Day and Labor Day. He explained further that if vehicles are allowed to traffic on the highway, the construction must be stopped, thus affecting the overall progress of the whole project. On the other hand, because the project was carried out urgently, many soft soil areas have not been fully treated, so if it is not really necessary, traffic will not be allowed to ensure safety.

Currently, the investor has been working with the Ministry of Transport, the State Council for Pre-Acceptance Test of Construction Works, and the State Audit to solve some shortcomings of the project. Especially, they are checking and identifying the potential risks of the roadbed due to the impacts of climate change and complicated geological conditions in the area. The specialized agencies will appraise and give out the solutions for the investor to handle these issues before accepting the completion of the project.

The investor also petitioned the Ministry of Transport and the People's Committee of Tien Giang Province to soon resolve the lingering problems related to the toll collection of the Ho Chi Minh City - Trung Luong Expressway, and at the same time use the existing toll stations on the HCMC – Trung Luong Expressway (Dem Market Station) to organize synchronous and interconnected toll collection management on the entire HCMC - My Thuan - Can Tho Expressway.

The early operation of the Trung Luong - My Thuan Expressway has a significant meaning to the socio-economic development of the Mekong Delta. Therefore, many people hope that the project will not delay its completion again. All reasons for missing the appointment are unacceptable.

The Trung Luong - My Thuan Expressway project has a total investment of more than VND14 trillion, expected to be completed in 2013. However, due to the poor capacity of investors, the project had been delayed. After changing investors and project management agencies many times, from the Ministry of Transport to the People's Committee of Tien Giang Province, the adjusted capital of the project is more than VND12 trillion.