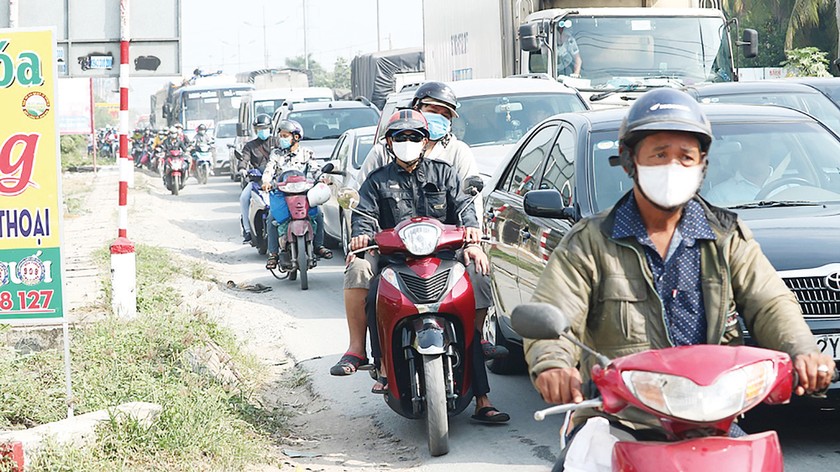 At present, it takes 3-4 hours to travel from HCMC to Can Tho City. (Photo: SGGP)
The project starts at An Binh Station in Di An City in Binh Duong Province and ends at Cai Rang Station in Cai Rang District in Can Tho City. The whole route connects six localities, including HCMC, Binh Duong, Long An, Tien Giang, Vinh Long, and Can Tho City, with 13 stations. The HCMC - Can Tho railway route is a double-track railway, using a standard gauge of 1,435 millimeters, with a design speed of about 190km/h for passenger trains and 120km/h for freight trains. With the above speed, the travel time from HCMC to Can Tho will be shortened to only 75-80 minutes, instead of 3-4 hours by road, as currently.

The HCMC - Can Tho railway project was approved by the Ministry of Transport under Decision No.2563/QD-BGTVT dated August 27, 2013. The objective of the master plan has determined specifically the route direction and the location of train stations for localities to manage the land fund, serving as a basis for calling for investment in construction until 2020 according to Resolution No.13/NQ-TW dated January 16, 2012, of the 11th Party Central Committee. The project has also been included in the railway network planning by the Prime Minister for the 2021-2030 period with a vision for 2050.

According to Decision No.4833/QD-UBND of the People's Committee of HCMC approving the project on the development of transport Infrastructure in HCMC in the 2020-2030 period. In the 2026-2030 period, the city will invest in the HCMC’s Urban Railway Line No.2 - Phase 2 (Ben Thanh - Thu Thiem section and Tham Luong - Tay Ninh Bus Station section). Therefore, it is necessary to connect Thu Thiem Station with Long Thanh International Airport, thereby forming a traffic network to ensure synchronism and smoothness.