A public beach in Mui Ne
In June, the People’s Committee of the Central Coastal province of Khanh Hoa issued a decision on taking back an area of 28,000 square meters of land and 10,000 square meters of sea surface from Ana Mandara resort on Tran Phu Street and asked the business to dismantle barriers to allow local people to use beaches freely and easily.

In July, the province took back an area of 21,722 square meters of land from the Phu Dong Park project operated by Nha Trang Invest Park Co., Ltd. The provincial People’s Committee delegated Nha Trang City to ask the investor to provide records and documents for the handover of the land area and schedule the date and time of handing over the premises. If the company does not carry out the request on time, the People’s Committee of Nha Trang City will be allowed to apply the order and procedures revoking the land site.
The government of the coastal city of Vung Tau in Ba Ria-Vung Tau Province has strictly directed to withdraw 28 hectares of land alongside the Thuy Van beach from tourist enterprises over the past one year.
In 1996, the People’s Committee of Ba Ria-Vung Tau Province assigned the land lots to Ba Ria - Vung Tau Province Construction and Installation Company to build infrastructures in Thuy Van beach. The company then leased the properties to businesses to build mass illegal tourism constructions.
Binh Thuan Province has a 192-km coastline along the sea and many popular tourist attractions but there is less sea space. Mui Ne national tourist site in Phan Thiet City has only two beaches, including Doi Duong and Ong Dia. Many resorts in Ham Tien and Mui Ne wards closely spaced to each other to block accesses to the beaches.
The People’s Committee of Phan Thiet City and Binh Thuan Province have carried out problem-solving solutions, including building more than 10 paths leading to beaches. However, this number does not yet meet people's demand for enjoying relaxing on the beaches. 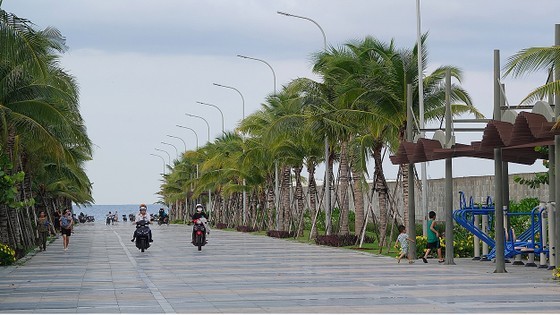 A beach path in Da Nang City
Ngu Hanh Son District in the coastal city of Da Nang also expanded the width of paths leading to beaches, located within Future Property Invest and the Nam Khang Resort Residences, Premier Village and Pullman Danang Beach Resort.
The city has revoked many hectares of land to open ways leading to beaches for local people. There are currently five beach paths on the streets of Truong Sa, Vo Nguyen Giap and Hoang Sa, placed at the end of Ho Xuan Huong Street, between Furama and Ariyana hotels, in the middle of Future Property Invest and Nam Khang projects, next to The Song and Silver Shores projects.
In 2021, the People’s Committee of Ba Ria-Vung Tau approved the adjustment of construction planning of public utilities, parks and beaches covering an area of 77.9 hectares; and other construction plans of public services on Thuy Van Street running along the beach.
The Party Committee of Khanh Hoa Province agreed with urban planning and design in the east of Tran Phu and Pham Van Dong streets, conducted checks and supervised constructions and projects on these roads.
The authorities of the Mekong Delta province of Kien Giang imposed penalties for the illegal construction of 18 bungalows at Cay Sao beach in Ham Ninh commune on Phu Quoc island, asked to suspend dive tourism in vulnerable coral reef areas in the south of An Thoi archipelago and move yachts converted from barges that anchored in the island’s south these cottages, and ordered the removal of bungalows of the north, said Vice Chairman of the People’s Committee of Kien Giang Province Le Quoc Anh.

The province kicked off the construction of a 15-km long walking street along the coastline in Bai Truong beach and adjusted the planning of Ong Lang, Dat Do, Ba Keo beaches.