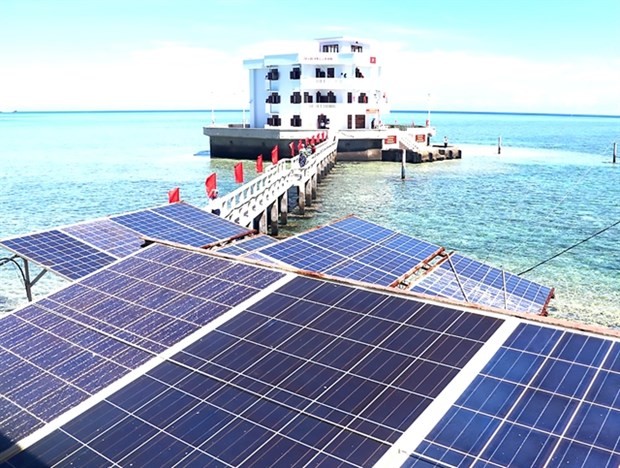 Solar and wind power is used widely in islands belonging to Vietnam's Truong Sa (Spratly) Archipelago, said Colonel Le Dinh Hai, Deputy Head of Brigade 146 under Naval Region 4.
Hai, who is also Chairman of the Truong Sa District People's Committee, said that the clean energy sources now could meet the daily needs of local residents for cooking, and powering TVs, radios and even electric fans at night.
"Truong Sa is the first district in Vietnam lit up with clean energy," Hai said, adding that thanks to the stable energy source, activities on the island became much more convenient than before.
Thai Minh Khai, a local resident living in Song Tu Tay Island, said his family had lived on the island for more than four years without finding any inconveniences thanks to stable clean power supply.
"There is no difference between the mainland and island when it comes to electric household appliances," Khai said, emphasising that with wind power and solar power systems, the living conditions of households and soldiers on the island has gotten better.
Before 2010, islands in the Truong Sa (Spratly) Archipelago mainly used diesel generators to generate electricity for daily life and lighting. Electricity powered by dynamometers is expensive, unstable, generates loud noise and pollutes the environment, so it was usually only used for a few hours in the evening and when absolutely necessary.
However, in recent years, clean energy electricity systems have been installed in Truong Sa which has a great advantage of sunny and windy weather.
Captain Tran The Tai, living in Da Nam Island, said that ever since solar and wind power systems were installed in the island, they can use freezers to preserve food and vegetables for a longer time. When it's hot, they can have cooling fans on.
Captain Do Minh Cuong, Chief of Nui Le Island, said that solar power was very strong and stable.
"The wind and solar systems have a designed capacity of generating 25 kw per hour. We can store the extra power for three days without recharging. We only use 5 kw a day," he said.
Harsh sea weather with strong heat, winds and storms challenge islanders and soldiers every day. They also must maintain solar panels, down to each screw and wire so that the equipment does not rust due to the salty seawater affecting the electrical system.
Clean energy systems with modern technology, managed by computers, also require operators to always learn additional knowledge to operate the system safely and effectively.
Lieutenant Colonel Tran Danh Hoang, Chief of Sinh Ton Island, said that it was difficult for the maintenance team to regularly travel from the mainland to the islands to replace components whenever a solar panel or a blower was damaged.
"Soldiers have to learn to fix problems," Hoang said, adding that they first found it difficult but after repairing and understanding the operating principles of energy batteries and blowers, they could do it well.
"Regular maintenance and periodic inspection help prolong the life of the equipment," he said.
However, the harsh climate, sunshine, wind, and salty sea water in Truong Sa have degraded and damaged some electrical systems. At some locations or islands, clean energy systems were built a decade ago, so the solar panels, blowers or energy storage batteries now need to be replaced and upgraded.
Captain Tran Van Binh from Toc Tan Island said that solar battery systems and wind blowers that were installed a long time ago, are now just 60-70% as effective as newly-installed ones.
"We regularly take care of the maintenance of the system and look forward to maintenance teams from the mainland to reach the islands regularly," he said.