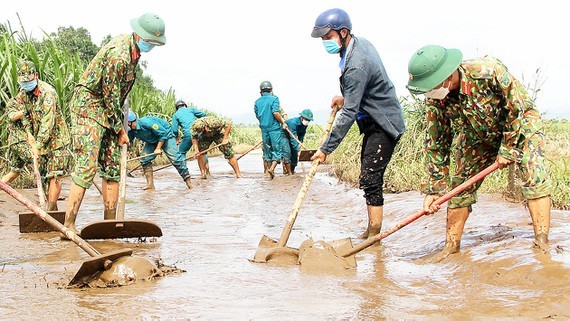 Soldiers and local forces have made efforts to assist in cleaning and repairing houses and works destroyed by floods. (Photo: SGGP)
Through preliminary statistics, floods have destroyed five anti-landslide dikes in the lower areas of Kon and Ha Thanh rivers, subsided two feet of Dai Han Bridge, causing traffic separation from Phuoc Loc Commune to Phuoc Hiep. Floods have collapsed many houses, swept away thousands of livestock, poultry, and other properties. Thousands of meters of canals, roads, and river banks have been damaged.

On December 2 and 3, the leaders of Binh Dinh Province went to flood-hit areas to visit, inspect, and direct the remedial work to stabilize people's lives soon. Charitable organizations have also contacted and given many gifts to people who have suffered severe damages.

In Phu Yen Province, soldiers and local forces have made efforts to assist in cleaning and repairing houses and works that had collapsed and swept away for people in the heavily flooded areas downstream of the Ba River. Mr. Pham Dinh Phung, Vice Chairman of the People's Committee Son Hoa District in Phu Yen Province, said that it was estimated that the recent flood had caused damage of VND81 billion to the district. Of which, the loss of people's livelihood was huge, with thousands of hectares of cassava, sugarcane, rice, and corn being swept away and destroyed. Especially, farmers in Son Hoa District had just harvested the summer-autumn rice crop. Before they could sell paddy, the flood came, causing flooding and damages. “In the short term, the district mobilizes resources to rescue people to repair the damage and stabilize their lives soon. Besides, the locality organizes disinfection in all flood-hit areas to ensure safe water sources for people to use," said Mr. Phung.