The campaign is taking place from the end of February to mid-March. It is part of the support programme for COVID-19-affected people carried out by the VRCS in 13 cities and provinces which have recorded coronavirus community infections, namely Hai Duong, Quang Ninh, Gia Lai, Bac Ninh, Binh Duong, Hanoi, Bac Giang, Ho Chi Minh City, Hoa Binh, Ha Giang, Dien Bien, Hai Phong and Hung Yen.
More than 10 tonnes of agricultural products were sold at the launching ceremony of the campaign in Hanoi on February 23.
According to President of the VRCS Central Committee Nguyen Thi Xuan Thu, the VRCS Central Committee asked the red cross society in Hai Duong province to choose agricultural products that meet food safety standards, and transport them to the Central Committee as well as the red cross society in Hanoi for distribution.
In the past three days, more than 20 tonnes of farm produce have been purchased by consumers in Hanoi, she said, adding all of the products are strictly sterilised before they are sold. 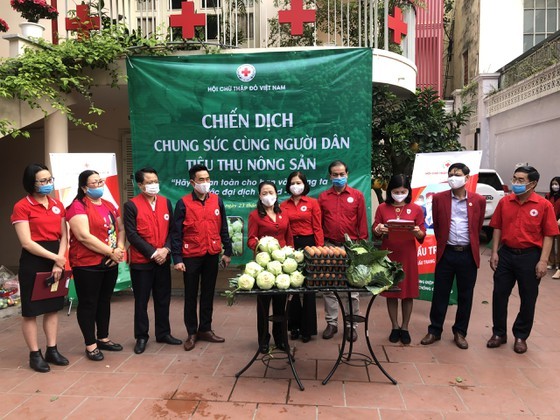 The Vietnam Red Cross Society (VRCS) at all levels have launching a campaign calling on domestic consumers to help farmers in the northern province of Hai Duong. (Photo: SGGP)