The transport sector has achieved fruitful result for its efforts in carrying out major goals of developing infrastructure in the 2015-2020 period.

So far, the transport sector has finished construction of 1,074-km expressway from 2011 to 2020 mostly completed within five recent years bringing the length of highway to 1,163 kilometers.
Specifically, many roads in the Northern region into Hanoi have been completed and the Hai Phong - Ha Long - Van Don coastal expressway connecting the Northern City of Hai Phong and the Northern Province of Quang Ninh. Simultaneously, the HCMC - Long Thanh - Dau Giay expressway and the HCMC - Trung Luong have been completed in the Southern region.
The two expressway projects Ben Luc - Long Thanh and the Trung Luong - My Thuan have been well underway. The Central region has also finished two expressways including Da Nang- Quang Ngai and Lien Khuong – Da Lat.
In addition to highway system, national roads have been upgraded from the Northern Province of Lang Son and the Mekong Delta Province of Ca Mau and the Central region.
Moreover, the transport sector has implemented scores of works including upgrade of river gate, canals to receive big ships. 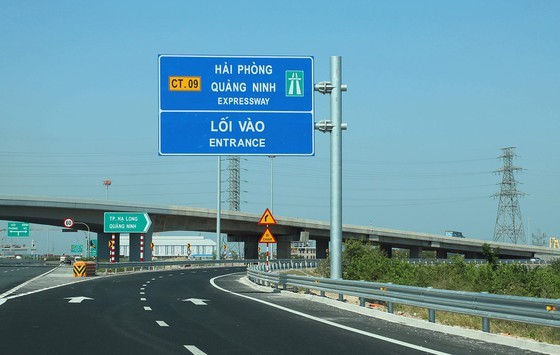 A section of the Hai Phong - Quang Ninh highway (Photo: SGGP)
Especially, the sector has announced the opening of 6 Inland Container Depots including ICD Truong Tho in Ho Chi Minh City; ICD Hai Linh in the Northern Province of Phu Tho and ICD Bac Ky in bac Ninh Province in the North. These ICDs have bettered the quality of transport service. In 2020, the Ministry has organized the groundbreaking ceremony for the construction of a canal linking the Day and Ninh Co rivers, which is regarded as the biggest of its kind in the northern region so far.
The Ministry has paid attention to investment of seaports synchronously. For instance, deep-water ports including Cai Mep – Thi Vai in the Southern Province of Ba Ria – Vung Tau and Lach Huyen in Hai Phong City can handle ships of up to 200,000 tons while other ports in Phu Quoc in the Mekong Delta Province of Kien Giang and the Northern Province of Quang Ninh can receive large ships in the world.
When it comes to aviation, upgrade and improvement of international airports Noi Bai, Tan Son Nhat, Da Nang and construction of new airports in Phu Quoc and Van Don were seen within five recent years; as a result, Vietnam can receive 90 million passenger a year.
Transport Minister Nguyen Van The said that the breakthrough in the sector has greatly contributed to re-structure of transport, reduction of transport fee, and the country's ability to successfully compete in the world market. Vietnam’s infrastructure quality and ability continues to improve according to the Global Competitive Report produced by the World Economic Forum.
Minister The said that the sector has adopted detailed plan and synchronous solutions to push up the country’s socio-economic growth. The sector will strive to build more highways so that the country will have around 3,858 -km highway by 2025 linking all provinces with ports, border gates, international airports.
Besides, the transport sector will speed up significant projects such as Long Thanh Airport and finish pre-feasible study of express railway.