This morning, Chief of the Office of Steering Committee for Natural Disaster Prevention and Control, Search and Rescue of Binh Thuan Province Nguyen Hung Tan said that rescuers are urgently searching for missing crews.

Previously, on July 10, fishing vessel BTh 97478TS of a 50-year-old man named Bui Van Toan who is a vessel owner and captain living in Phan Thiet City of Binh Thuan Province along with 18 workers lost contact and there was no signal of monitoring device as they were operating at the waters of Spratly Islands, DK1 off-shore rigs under bad weather condition of big waves and blustery winds.

Upon receiving information, the People’s Committee of Binh Thuan called on the provincial Border Guard Command to keep monitoring, directing and announcing rescuing forces and other fishing boats of the province working at sea nearby the location of failing to make contact with the fishing boat to give support for searching. 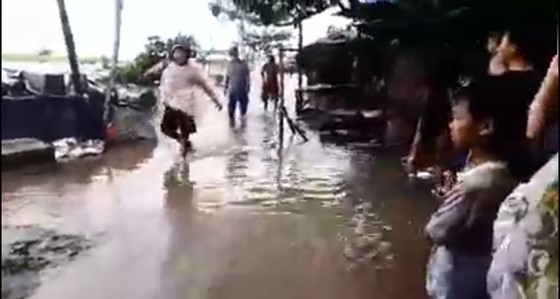 The site where a fishing boat carrying seven crew members was sunk in Kien Giang province
This morning, Chairwoman of the People’s Committee of Duong Dong Ward Ms.Tran My Hiep said that the border guards coordinated with local people to rescue five people; a dead body was found and one person remains missing.

In recent days, thundery downpours blew up the roof of 224 houses in Kien Giang Province.
This morning, a person was killed after whirlwinds caused a power line to fall.
Currently, all means of transport carrying passengers from the mainland to islands and vice versa have to suspend operation amid the worse weather with blustery winds of up to level 8 and rough sea.