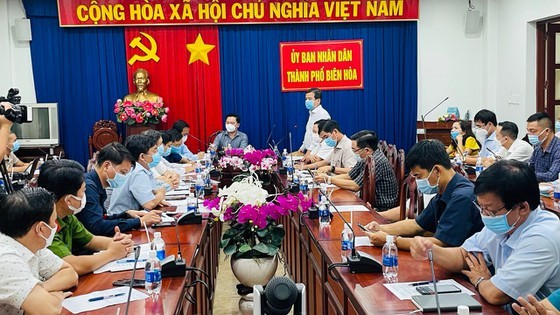 Accordingly, a 32-year-old woman in Tan Phu Ward in Thu Duc City, who is the Head of Inventory Department at Tommbow Company at Lot 514 in Amata Industrial Park, is at risk of contracting coronavirus because her husband was tested positive for SARS-CoV-2 on June 7.

According to an epidemiological investigation, the husband was advised to stay at home for self-isolation by the company on May 30 as a preventative measure. However, he was informed by the company that he was in the F2 category on June 3, and then on the next day, he was told to become F1 category, so he was taken to concentrated isolation.
The woman returned home to Tan Cang Hamlet in Bien Hoa City on June 3. On the next day, she worked at the company in Amata Industrial Park and returned home in Thu Duc City, and worked at home since then. She is waiting for test results from the Center for Disease Control of Ho Chi Minh City.
At the meeting, Vice-Chairman of Bien Hoa City People's Committee Nguyen Duy Tan said that after receiving the information, the city's functional forces investigated and traced 27 contacts F2 of the woman. All 27 people are being currently isolated at the company.
This morning, their test results came out to be negative for SARS-CoV-2 for the first time. In addition, the functional forces have also identified more than 850 workers in Amata industrial park who had been contacting the woman.
Bien Hoa City has notified the health stations of communes and wards where contacts F2 live so that the F2s can make medical declarations and self-isolate at home. Bien Hoa City Medical Center yesterday sprayed disinfectants throughout the company. Police officers and soldiers prevented people from entering and leaving the company.