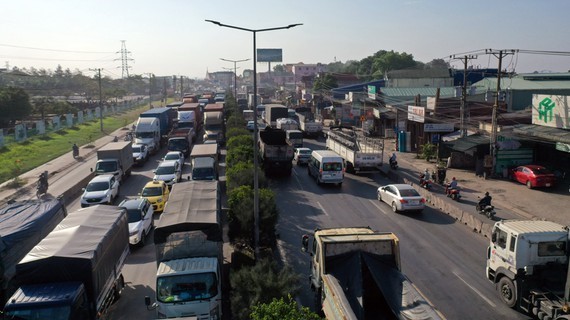 Slow traffic on National Route 51 during Labor Day holiday 2021. (Photo: SGGP)
There have been plans for new intersections of varying scales along National Route 51 as agreed upon by the investor of existing toll stations on the route, BVEC, and local authorities at Dong Nai and Ba Ria - Vung Tau provinces.

As well, BVEC and the two provinces have proposed to build 10 more overpasses and underpasses on National Route 51 under the BOT investment form, as well as expand the route itself to 8 lanes in some parts.
Another two projects proposed to the Ministry of Transport are the Phuoc An Bridge project worth VND5,000 billion (about US$217 million) connecting Ba Ria – Vung Tau with Dong Nai and the Long Thanh – Dau Giay Expressway, and a railway from Trang Bom to Vung Tau. The projects are expected to relieve National Route 51 from overflowing road traffic.
In terms of near-completion projects, the extended Street 319 from Bien Hoa to Long Thanh, Nhon Trach (Dong Nai Province) using the HCMC - Long Thanh - Dau Giay Expressway is expected to be completed and put into use from June 30, 2021.
Meanwhile, the highway connecting Bien Hoa and Vung Tau planned in 2018 to relieve traffic through National Route 51 has not started due to administrative roadblocks.
Notice from the Ministry of Transport says toll collection along National Route 51 will cease within 2021, which might lead to manufacturers using inland roads as the main route of transport to cut costs, causing more traffic jams.
Traffic experts suggest building railways to help transport goods from ports and industrial zones and reduce traffic jams, pollution, and road accidents in the long run.