According to recent reports, in addition to bad weather or technical difficulty as the usual reasons for flight delays, the long queues of planes at major airports is causing more delays than ever.
The spokesman of Tan Son Nhat International Airport in HCMC explained the situation, saying that airway development is growing at such a lightning speed while the airport’s runway and taxi system has long been outdated. In many cases, air traffic controllers are forced to keep planes on the ground or extend their aerial time to arrange proper take-off order.
Built before 1975, some of the runways at Tan Son Nhat Airport are damaged and need to be regularly maintained and repaired, while others are supporting a number of aircrafts which exceed their originally planned capacity.
According to Vo Huy Cuong, Deputy Director of Civil Aviation Administration of Vietnam (CAAV), Noi Bai and Tan Son Nhat airports have to support new generation aircrafts with larger load and wheel pressure than originally calculated. The maintenance being done could barely maintain daily activities for a short time.
Long-established airports in Vietnam were designed with a total capacity of 144 million passengers per year while a number of projects which in total would uphold about 78-80 million passengers per year are being delayed due to complications in policy. 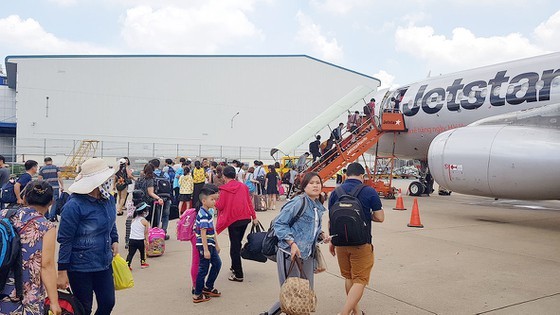 Passengers at Tan Son Nhat Airport lining up to go on board. (Photo: SGGP)
Problems must be solved at once
According to the CAAV, before going equitization, the Airports Corporation of Vietnam (ACV) is responsible for investing in upgrading, renovating, expanding and developing the entire airports, including the runways and taxiways. After the equitisation from April 1, 2016, the runways and taxiways of airports become state assets, therefore the Ministry of Transport (MOT) is responsible for investment of these items. However, due to extremely difficult medium-term funding in the 2016-2020 period, the Ministry of Transport has not been able to balance and allocate state budget capital.

The Ministry of Transport submitted to the Prime Minister a scheme with 2 options in order to assign the management, use and exploitation of aviation infrastructure assets invested and managed by the State. The first option is an annual maintenance budget allocated by the state budget which is assigned to ACV; and the second option, which was preferred by MOT, is for ACV to carry out maintenance work with revenue from the exploitation of aviation infrastructure assets.
However, many economic experts as well as the public had expressed concern over assigning the investment and upgrading of airports for ACV, since this company has committed several violations in the process of equitisation.
According to the Transport Ministry, the repair and upgrading of flight zone infrastructure should be implemented as quickly as possible to ensure flight safety. Currently, the ministry has approved of a number of projects to invest and upgrade airport infrastructure, namely 2 projects at Noi Bai Airport and 3 projects at Tan Son Nhat Airport.
In parallel with the approval of these projects, the ministry is continuing to propose the Prime Minister to consider adding a plan to use 10% of medium-term reserve in 2016-2020 period to invest in renovating and upgrading the runway system and taxiway at Tan Son Nhat Airport and Noi Bai Airport.
According to the Ministry of Transport’s leader, the most important solution to solve the radical overload at Tan Son Nhat Airport is the construction of Long Thanh International Airport. The ministry has completed surveys and preparation of a feasibility study report to submit to the Government and Standing Committee of the National Assembly for approval at the October 2019 meeting.