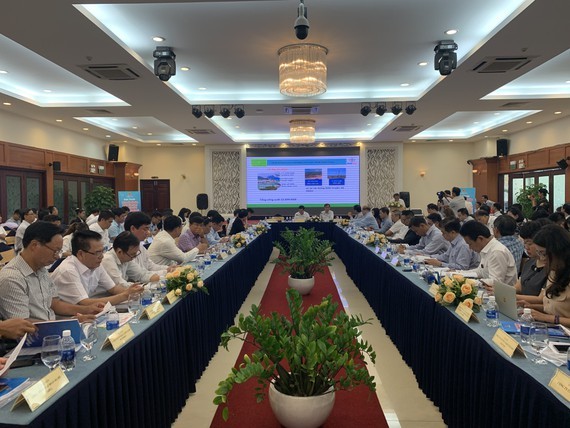 At the conference  ( Photo: SGGP)

At the conference, enterprises said that thanks to open mechanism and the Ministry and local administration’s determination, the renewable energy sector has seen incredible growth achieving over 5,500 MW.

Aside from that, solar power has produced 5,000 MW including 4,500 MW having been connected with the national grid. 31,570 rooftop solar-panel power project have generated a capacity of more than 657.88 MWp.
Over 3 billion kilowatthours (kWh) of renewable energy sources were generated monthly accounting for 10 percent of the whole country’s electricity and 6 percent of the commercial quantities.
Open mechanism also facilitated participation of thousands of investors and local, international enterprises in doing researches , production, distribution and other services.
At the conference, enterprises voiced their opinions of new policies of social contribution and other matters relating to management, installment technique standard. For instance, there has been certain limitations in renewable energy development especially wind power, solar power in the Central and the South regions where have great potential.
Specifically, infrastructure of the national electricity grid has not kept up with the pace of renewable energy projects. Wind power projects in the south - central provinces of Ninh Thuan and Binh Thuan have not operated at their full capacity at a certain time.
Despite very potential, rooftop solar-panel power has fallen short of expectations because primary cost is so high that people can afford without support of financial institutions. Moreover, there has been no specific technique standard which has hampered residents and enterprises' installation.
Deputy Minister of Industry and Trade Hoang Quoc Vuong affirmed that the government has introduced policies and mechanisms to encourage investment in each phase transparently so that every people from all walks of life can take part in exploiting renewable energy for the country’s sustainable socioeconomic growth.
The Ministry has been planning action programs which will be implemented in the next time, Mr. Vuong said. The Ministry will listen to all opinions to perfect policies and mechanisms to create favorable condition for all people and enterprises in exploiting the new energies.