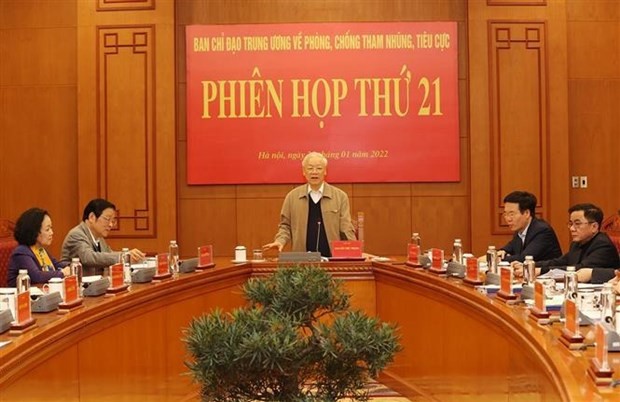 Party General Secretary Nguyen Phu Trong speaks at the meeting. (Photo: VNA)
Those included 10 major cases under the supervision of the steering committee. It is noteworthy that many new serious cases have been brought to light, which involved both incumbent and retired high-ranking officials and officers of general ranks in the armed forces, 10 of whom were under the management of the Politburo and the Party Central Committee's Secretariat.

Progress was seen in the recovery of assets in corruption cases, with over VND9 trillion reclaimed in 2021.

Party committees and Party inspection commissions at all levels intensified supervision and inspection, with 618 Party members disciplined last year for corruption or intentional wrongdoings. The Party Central Committee, the Politburo and the Secretariat meted out disciplinary measures on many high-ranking officials for their involvement in corruption.

Party General Secretary Nguyen Phu Trong, head of the steering committee, said the commission had given concerted and effective instructions in inspection, auditing, investigation, prosecution, trial and sentence enforcement, while preventive work continued to be promoted, reflecting the strong resolve to fight corruption.

He highlighted that Party committees, Party organizations and relevant agencies held seven national conferences to launch the implementation of the resolution of the 13th National Party Congress, including one dedicated to internal political work and corruption prevention. Many important documents on Party building and rectification were issued, such as Conclusion 21-KL/TW of the Party Central Committee on intensifying the building and rectification of the Party and political system, Regulation 37-QD/TW on things that Party members are banned from doing, among others.

The Party chief said the handling of wrongdoings in anti-corruption agencies was also been intensified, and the detection and settlement of corruption cases in localities showed positive progress.

He ordered stepping up anti-corruption popularization work and enhancing the role of the Vietnam Fatherland Front and its member organizations, as well as the role of the press circle and people in the corruption combat.

The leader requested the consolidation of institutions, saying it is necessary to tackle loopholes and shortcomings in mechanisms, policies and laws on bidding, auction and the use of land, finance and public assets.

The Law on Investment, the Land Law and the law on democracy practice in communes, wards and towns, and other relevant bills should be amended and supplemented, he continued.

He required that the commission focus its instruction on serious cases to fulfil the plan set for the year, including completing investigations into 16 cases and prosecution of 20 cases, while first-instance trials should be held for 22 cases.

The Party General Secretary urged the serious handling of violations to create breakthroughs in the evaluation and recovery of assets in corruption cases.