Opening the conference, the head of the diplomatic sector noted that the diplomatic sector has contributed to mobilising external resources for national growth, protecting national independence, sovereignty, territory and maintaining peaceful and stable environment for development, as assigned by the leader of the Communist Party of Vietnam at the previous Diplomatic Conference.

Addressing the conference, Party General Secretary Nguyen Phu Trong also shared the praise for the diplomatic sector, noting that in the past three years, especially in 2017, the sector recorded various important achievements and became a bright spot in the country’s success.

Particularly, the sector has made important contribution to boosting the country’s economic growth, he said, underlining the fact that since 2016, the country has seen a higher economic growth than the average in the 2011-2015 period, while all macro-economic indications have been positive, especially foreign investment and import-export revenue.

At the same time, donors also committed over 3 billion USD in official development assistance for Vietnam to 2020.

The number of foreign tourists to Vietnam hit a record 13 million. 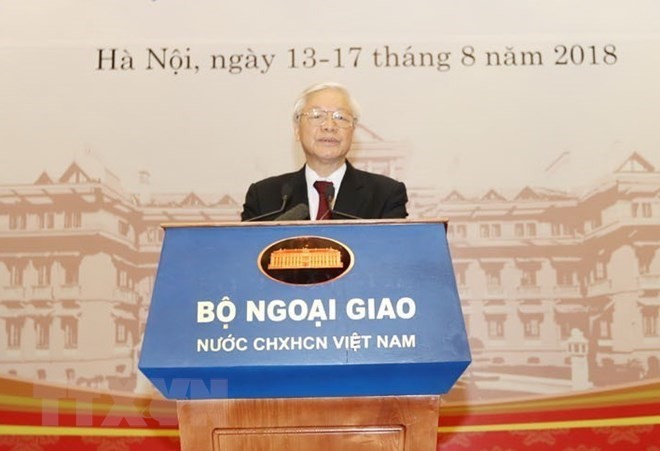 He stressed that diplomatic activities have played an important role in enhancing the position of Vietnam in the world arena, and deepening and consolidating the relations between Vietnam and other countries, especially prioritised and important partners.

The attainments have proved that the foreign policy set by the 12th Party National Congress and the Party’s relevant policies related to foreign affairs are correct, he said.

“Vietnam always pursues the consistent foreign policy of independence, self-reliance, peace, cooperation and development, multilateralising and diversifying relationship, and actively and proactively integrating into the world for national benefits,” he stated.

The Party chief highlighted that issues of core interest require Vietnam to raise a stronger voice and take a more active stance, first of all in the region.

He asked the sector to continue implementing the Party’s guidelines on foreign policy for the overall goal of maintaining a peaceful and stable environment favourable for the cause of national construction and defence, while resolutely and persistently safeguarding national independence, sovereignty and legitimate interests in line with international law.

It is crucial to stay persistent and judicious in the settlement of complicated external maters, including those related to sovereignty and territory, he underscored.

The Party General Secretary also requested the sector to enhance the efficiency of external activities, especially in economic and security-defence cooperation with other countries.

The diplomatic conference, which was initiated in 1957, convenes every two years to provide a venue for the diplomatic sector to reach consensus on awareness, resolve and action to effectively implement the Party and State’s foreign policy.

The 30th edition is expected to discuss measures to maintain the effective implementation of the 12th National Party Congress’s resolution, which emphasised the tasks of protecting national independence, sovereignty, unification and territorial integrity, maintaining peace and stability to serve national development, expanding diplomatic relations, effectively implementing international integration and continuing to raise the country’s position and prestige in the international arena.