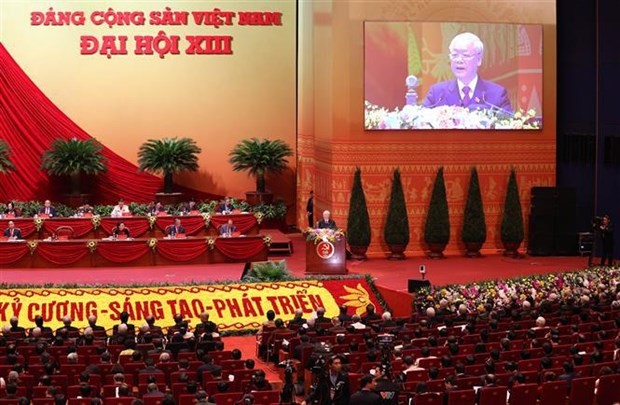 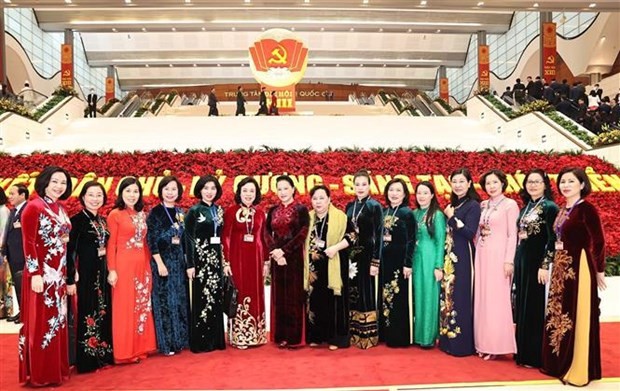 NA Chairwoman Nguyen Thi Kim Ngan (ninth from right) poses for a photo with female delegates of Hanoi (Photo: VNA)
The awakening of people’s patriotism, national self-resiliency, and strength of great national solidarity as well as the desire for a prosperous and happy nation is an important source of momentum and a resource for growth, along with the promotion of the strength of the entire political system as well as the culture and people of Vietnam, encouraging renovation and the application of science and technology, especially the achievements of the fourth Industrial Revolution.
Meanwhile, a decisive factor in the success of national construction, development, and defense is to continue to strengthen the building and rectification of the Party, and enhance the leadership and ruling capacity as well as the combat strength of the Party.
The general development goal for the 2021-2025 period and following years is improving the leadership and ruling capacity and the combativeness of the Party; building a pure and comprehensively strong Party and political system; reinforcing people’s trust in the Party, State and socialism; sparking the desire to develop a prosperous and happy nation with the promotion of the will and strength from the national great solidarity bloc in combination with the power of the era; comprehensively speeding up the cause of renewal, industrialization, and modernization; constructing and firmly safeguarding the Fatherland, firmly maintaining a peaceful and stable environment; and striving to turn Vietnam into a socialist-oriented developed country by the middle of the 21st century.
Highlighting the major orientations in important development issues for the country over the next 10 years, the Party General Secretary underlined that the 13th tenure is an important landmark and transitional step, laying the foundation for following tenures to successfully realize the goals included in the national development strategy to 2030 and a vision to 2045.
Promoting the strength of the great national unity bloc
With the motto “Solidarity - Democracy - Discipline - Creativeness - Development”, the Party General Secretary asked the congress to undertake careful discussions to reach high consensus and vote for approval of the documents, thus ensuring the success of the congress and paving the way for the popularization and implementation of the Resolution of the 13th National Party Congress, and successfully completing all set targets and tasks.
The Party leader expressed his belief that with a right direction in line with the rules, the cohesion of the Party policies and people’s aspirations, the promotion of the great national unity bloc and the strong desire to rise up as well as high political determination, the entire Party, people, and army is certain to achieve new growth miracles towards the goal of “wealthy people and a strong, democratic, equal and civilized country”, thus taking steady steps towards socialism and successfully turning the wish of President Ho Chi Minh and the aspirations of the whole nation into reality.
Following the opening ceremony, Tran Quoc Vuong, member of the Politburo and permanent member of the 12th Party Central Committee’s Secretariat, delivered a report reviewing the leadership and direction of the 12th Party Central Committee.
In the afternoon, the congress worked in groups to discuss the draft documents.