1. Achievements and many positive results in the prevention and fight against the Covid-19 pandemic.

By November 30, 2020, the Vietnam Fatherland Front's Central Committee received more than VND2,263 billion (US$98 million) worth of financial aids and goods from localities nationwide amidst the pandemic crisis. 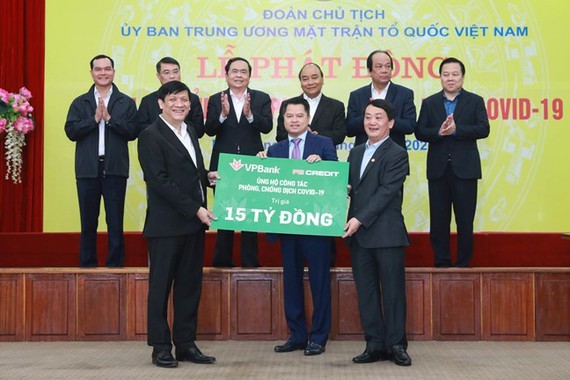 Representatives of the Vietnam Fatherland Front's Central Committee receive financial aids for Covid-19 pandemic prevention and control
2. Promptly mobilizing and receiving support and relief for flood-hit victims in the Central region with the total amount of over VND350 billion (US$15 million), contributing to helping people stabilize their lives.

3. Successfully organizing the program “The whole country join hands for the poor” in 2020.
Through social programs, 220 agencies, units, groups, corporations, businesses and individuals had provided financial aids as well as committed to raising fund for the poor people and social security with the total value of VND2,400 billion (US$104 million).

4. Successfully holding the National Patriotic Emulation Congress of VFF for the 2020-2025 period.

Through the congress, 180 delegates who are outstanding individuals in the implementation of patriotic emulation movements, were honorly praised.

5. Launching activities to mark the 90th founding anniversary of the Vietnam United National Front – the traditional day of the Vietnam Fatherland Front (on November 18, 1930 - 2020).

At the event, the Central Committee of the Vietnam Fatherland Front received the Order of Ho Chi Minh from Vietnamese Prime Minister Nguyen Xuan Phuc for its great contributions and outstanding achievements, contributing to the revolutionary career of the Party and the nation.

On the 90th founding anniversary, there were 101,752 residential areas, accounting for 92.5 percent of total held the festival with warmly atmosphere.

8. The summary ceremony and the 14th National Press Awards “For the cause of the great national solidarity”.

81 articles were honored at the press awards which highlighted solidarity, aspirations for national development, self-reliance and creativity in community.
9. On the occasion of the 75th anniversary of the August Revolution (August 19, 1945 - 2020) and the National Day (September 2), the Standing Committee of the Vietnam Fatherland Front's Central Committee in coordination with the Vietnam Union of Science and Technology Associations and the Ministry of Science and Technology organized the ceremony to launch the Vietnam Golden Book of Creativity 2020 with the aim to honor and introduce outstanding innovative scientific and technological works.

75 authors and groups of authors with creative works and solutions to make practical and effective contributions in the field of science and technology and seven representatives of author groups having outstanding innovative scientific solutions for Covid-19 pandemic prevention and control were praised at the event.

The Central Committee of the Vietnam Fatherland Front had strengthened the grasp of public opinion, promoted propaganda, organized conferences to collect comments on the draft documents of Party Congress at all levels, implemented practical and meaningful works to welcome the congress.