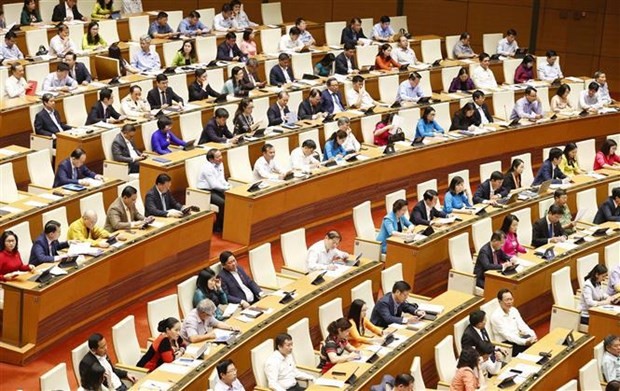 NA deputies talked about this issue at a discussion on socio-economic and budgetary affairs on October 27, part of the ongoing fourth session of the 15th National Assembly.

According to NA deputies’ reports, the world situation is difficult with various changes; therefore, it is unpredictable. With a large economic openness, Vietnam is inevitable to be influenced by global fluctuations.

Increased inflation pressure, sharp fluctuation in the prices of petrol and oil and raw materials, along with epidemics, natural disasters, storms and floods, complicated developments have been causing a lot of damage to production, business and people's living conditions. National Assembly deputies expressed their concern that these above-mentioned things will affect the implementation of the socio-economic development plan in 2022.

Twenty-two NA deputies assessed that GDP growth in nine months was estimated at 8.83 percent and the year’s growth was estimated at 8 percent, exceeding the set target of 6-6.5 percent, which are outstanding results that have been highly appreciated by the world. Nevertheless, deputies raised their opinions that growth is high, but compared to 2019, this rate just only increased by 5 percent, and this is a challenge to the growth target for the whole term 2021-2025.

Regarding the forecast for the country’s growth, in his report to the National Assembly deputies, Minister of Planning and Investment Nguyen Chi Dung said that the world economy in 2023 is forecasted with many risks and challenges when the current Russia-Ukraine conflict has not yet had signs of an end, leading to an increase in food and energy prices, escalation of inflation and a sharp increase in interest rates.

Besides the prosperity of the economy in 2022, it is forecasted that the Vietnamese economy will also face many difficulties and challenges in 2023. Although the Covid-19 epidemic has been controlled, there are still many existing risks of outbreaks with new strains and increasing inflationary pressure, and financial market risks. Worse, production activities are still dependent on foreign countries, it is highly likely to decline with the fall of the world economy.

The Minister emphasized that however, despite the above-mentioned uncertainties, there is still room to support economic growth with good expectations such as the Government's effective and proactive macro-control policy; plus, public investment is likely to recover strongly next year, disbursement of infrastructure investment of the recovery package will mainly focus on 2023, inflation remains within a safe range while tourism and consumption continue to recover well.

Based on the assessment of advantages and disadvantages in 2023, the economic growth target in 2023 is forecast to reach about 6.5 percent, which is suitable for the general context, according to the head of the Ministry of Planning and Investment.

Regarding the financial and capital markets, the Secretary General of the National Assembly said that the recent SCB incident was said to be a small shock, which had an impact on the country’s macroeconomic management, monetary policy monetary, fiscal, monetary security and banking operations, securities, as well as the real estate market.

In fact, according to NA deputies’ opinions, the problems of the financial market, corporate bonds, real estate, interest rates, and bad debts, large enterprises borrow a high proportion of outstanding loans from one customer; hence, when the customers had problems, it will greatly affect the bank’s safety.

As a result, deputies suggested closely monitoring the assets of banks, bad debts, and cross-ownership between banks and real estate businesses. The government needs to be more flexible in operating the real estate market to reduce difficulties for the financial market, as these two markets are closely linked.

In respect of corporate bonds, NA deputies said that it is necessary to have conditions to increase the quality of issued bonds, assess the debt repayment capacity and ability, use targets and mobilize interest rates of bond issuers. They suggested that the National Assembly should have thematic supervision of the bond market.