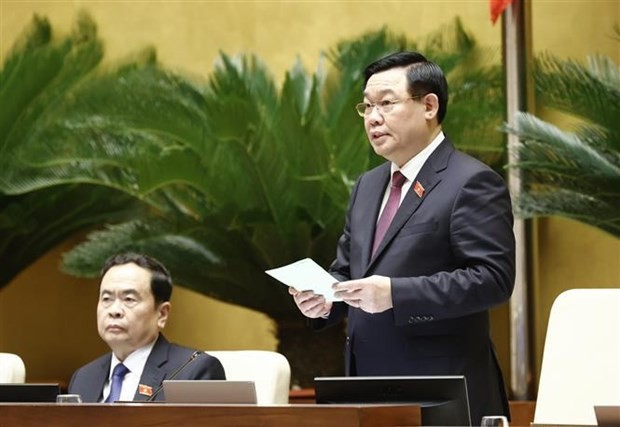 Speaking at the end of the Q&A session on June 9, Hue affirmed that the session took place in a democratic and frank atmosphere, attracting attention from people and voters nationwide.

During the event, three ministers and the Governor of the State Bank of Vietnam answered questions raised by lawmakers and Deputy Prime Ministers and other ministers cleared up related issues.

According to the top legislator, as many as 266 NA deputies registered to join questioning, with 131 of them exercised the right to question.

The Permanent Deputy PM, Deputy PMs and all the ministers who answered questions at the session firmly understand the current situation of the industries and fields they are in charge of, Hue said.

They answered frankly and did not avoid difficult and complicated issues that have existed and answered in previous sessions, helping clarify more issues of concern to NA deputies, he added.

The results of the session showed the diligence, seriousness and high responsibility of the Government, the PM, the Deputy PMs, and ministers and heads of sectors, Hue stressed.

Based on the results of the session, the NA Standing Committee will direct relevant agencies to study and prepare a resolution on the questioning and answering questions to submit to the NA for consideration and approval at the end of the third session as a basis for the implementation and supervision.

Agencies of the NA, on the basis of the resolution on questioning, will organize to supervise the implementation of contents questioned, and actively hold explanation sessions on emerging issues in areas they are in charge of, the NA Chairman added.

Friday, February 03, 2023 20:46
The government and people of the northern central coastal province of Ha Tinh held a ceremony celebrating the death anniversary of King Mai Hac De on February 3 (on the 13 th day of the first lunar month).