The hotel complex and apartment block locate in Vo Nguyen Giap street, Son Tra district, the central city of Da Nang; invested by Dien Bien Construction Company No.1 according to the license granted on February 17 last year by the Da Nang city Department of Construction.

According to the license, the project has 42 storeys and two basement levels. The 2nd to 5th storeys in the apartment block are for parking lots, gymnasium, swimming pools and kindergarten and public area.

During construction process, the investor has not followed approved designs and on its own turned each of the four storeys into 26 apartments for sale.

Deputy director of the Da Nang city Department of Construction Thai Ngoc Trung said that after spotting the violation, the agency’s inspectorate has issued a decision penalizing the company VND40 million ($1,800) and required it to stop construction of the violating works.

The agency also proposed the People’s Committees of Ngu Hanh Son district and My An ward to supervise the investor over how it abides by the decision.

On April 11 this year, the Department of Construction proposed the People’s Committee of My An ward to draw up a document, requiring the company to stop building the violating works. The committee has issued a decision suspending the works.

The Department of Construction afterward sent a report to the city People’s Committee that has required the investor to stop building. In case the company repeats the violation, it will be handled according to the Government’s Decree 121.

The city People’s Committee has assigned Ngu Hanh Son district and My An ward people’s committees to tightly supervise the investor over its compliance with the requirement.

On May 9 this year, Dien Bien Company sent a document to the city People’s Committee, the Department of Construction, Ngu Hanh Son district and My An ward people’s committees, committing to stopping the violation works and not handing over apartments from the 2nd to 5th storeys to customers until all relevant legal procedures have been fulfilled.

Previously, the Department of Construction asked opinions of the Construction Activity Management Agency under the Ministry of Construction, the city People’s Committee and the Party Committee’s Standing Board about the function change on September 20 last year. 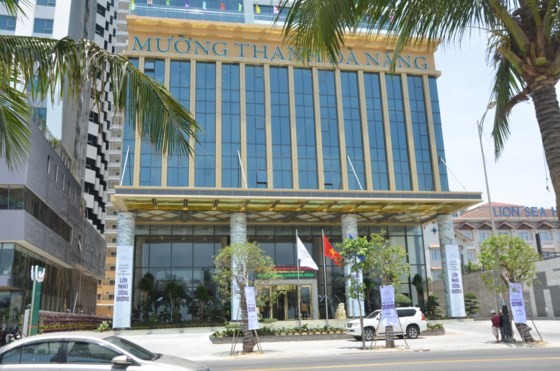 Most of apartments at the complex has been sold out (Photo: SGGP)

The agency and the city People’s Committee have responded to the department and the department has invited the investor to its headquarters and guided the company to do procedures for the function change.

So far, the investor has sent documents to the Construction Activity Management Agency and the city’s Firefighting and Prevention Police Agency to assess changed designs, the Department of Natural Resources and Environment to estimate environmental impact.

Still, Mr. Thai Ngoc Trung said that the company has yet to complete and submit to the department relevant procedures for the license change. The department has not received the investor’s application for the change.