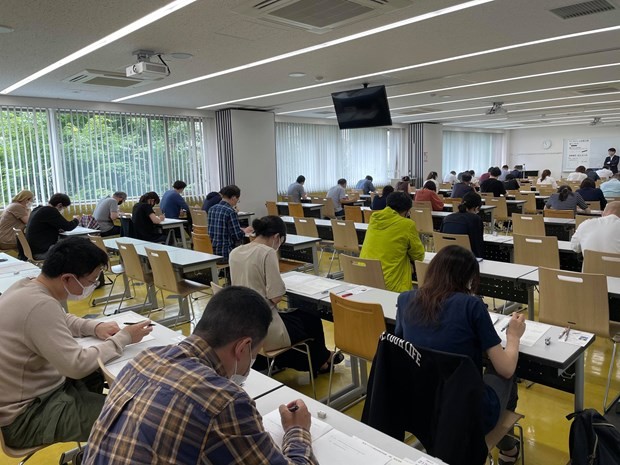 A test room of the Vietnamese language proficiency exams in Tokyo on June 20 (Photo: VNA)

After a one-year hiatus due to COVID-19, the Japan College of Foreign Languages (JCFL) held the fourth Vietnamese language proficiency exams in Tokyo on June 20, attracting 561 participants, 182 more than the first tests organised in 2017.

Among them, the eldest is Matsumiya Masaharu, 80, who used to teach the Japanese language in Hanoi. He got up at 4am and travelled hundreds of kilometres from Hyogo prefecture to come to Tokyo for the tests.

Masayoshi Fujino, director for external relations at JCFL and member of the testing council, said despite the complex COVID-19 situation, the exams attracted a large number of participants from across Japan, from the prefectures neighbouring Tokyo like Chiba, Saitama, and Kanagawa to farther places such as Hyogo and Okinawa.

PhD Dinh Sy Dien, member of the testing council, said the rate of participants passing the exams has been rising over the past years, with the average figure of all levels going from 16.7 percent in 2017 to 29.8 percent in 2018. The passing rates stood at 64.3 percent for exams at Level 6, the lowest level, and 32 percent for Level-2 exams in 2019.

JCFL President Ise Yoji said relations between Vietnam and Japan have been thriving in all aspects such as economy, trade, and investment in recent years, hence the growing demand for learning the Vietnamese language among Japanese people.

In the time ahead, the school will organise Vietnamese language proficiency tests in not only Tokyo but also other big cities like Osaka, Fukuoka, and Kyushu, he added.