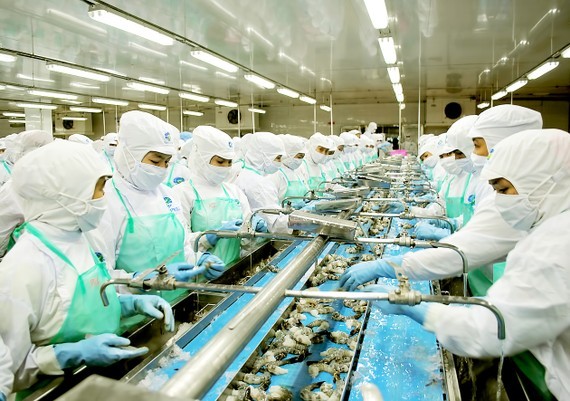 Shrimp processing for export at a seafood company in Ca Mau Province. (Photo: SGGP)
Seafood exports soar Shrimp export is one of the bright spots of many coastal provinces in the Mekong Delta. Mr. Tran Van Lau, Chairman of the People's Committee of Soc Trang Province, said that in three quarters of 2022, the seafood export value (mainly shrimp) in the province had reached nearly $1 billion, becoming a commodity that brought in the highest export value. Currently, Soc Trang Province has 22 seafood processing and exporting factories. Its aquatic products are available in 40 countries and territories, creating jobs for tens of thousands of workers. Similarly, Ca Mau Province's shrimp exports are approaching the $1 billion mark. Specifically, by October 2022, shrimp exports had raked in over $960 million, reaching nearly 90 percent of the plan, up roughly 15 percent over the same period last year. Bac Lieu Province’s shrimp exports hit about $686 million, equaling 76 percent of the plan, up 10 percent over the same period. Talking about the shrimp export situation, Mr. Le Van Chau, Director of Giang Chau Company Limited in Tan Trung Commune, Dam Doi District, Ca Mau Province, said that shrimp exports were extremely favorable in the first two quarters of the year with orders increasing. However, orders slowed down in the third quarter. “Although each company has its own business plan and strategy, the general assessment is that export orders will increase sharply at the end of the year. We are increasing production to provide orders for partners. It is forecasted that this year, shrimp exports of enterprises will still be positive and post a high growth compared to the previous year," Mr. Le Van Chau informed. Besides shrimp, pangasius exports also grew impressively. According to the Vietnam Association of Seafood Exporters and Producers (VASEP), by the end of October 2022, pangasius exports reached nearly $2.2 billion, an increase of 80 percent over the same period in 2021. Most pangasius businesses saw growth in sales year-on-year, mainly thanks to higher export prices. The two main export markets of Vietnam's pangasius are China, accounting for 30 percent, and the US, accounting for 23 percent. As for the US market, after a rapid increase in the first half of the year, increased inventories and congestion at import ports have caused the demand of the US market to slump. Meanwhile, exports to the Chinese market have continued to recover strongly because the zero Covid-19 policy has caused the country to face a shortage of food and seafood. In addition, Vietnam has also sharply promoted exports to markets where the country participates in the Comprehensive and Progressive Agreement for Trans-Pacific Partnership (CPTPP) and some Asian markets, taking advantage of tariffs and geographical factors. Mr. Ho Quoc Luc, Chairman of the Board of Directors of Sao Ta Food Joint Stock Company, said that the positive results were partly because the Covid-19 pandemic had been eased. The distribution system predicted that demand would increase, so partners bought heavily. According to the leaders of the departments of Industry and Trade of the Mekong Delta provinces, seafood exports in the first ten months of 2022 were quite good compared to the plan and saw an increase compared to the same period in 2021 due to the high demand in the importing markets, especially the first half of the year. Besides, localities also strengthen trade promotion activities with other countries. The advantages of free trade agreements have been exploited well, so seafood export turnover to markets has risen sharply. However, the seafood export situation at the end of the year still has many challenges.Seafood exports are forecast to reach $11 billion According to Mr. Truong Dinh Hoe, General Secretary of VASEP, Vietnam currently has 600,000 hectares of black tiger shrimps and 150,000 hectares of white-leg shrimps, mostly concentrated in the Mekong Delta. In 2021, the country's white-leg and black tiger shrimp exports were only about $3.6 billion. Meanwhile, in the same period, Ecuador only had 330,000 hectares of white-leg shrimps, but it could export more than $5 billion of shrimps. From the above fact, Mr. Truong Dinh Hoe said that Vietnam's shrimp had not yet brought into play its full potential and advantages to bring about high export value. Although the shrimp farming area is large, household-scale shrimp farming still accounts for the largest proportion. The large-scale white-leg shrimp farming accounts for only about 10 percent, equivalent to 15,000 hectares, and shrimp cultured under the rice-shrimp farming model, wild shrimp, and organic shrimp account for a small proportion. “Therefore, the strategic planning of shrimp farming areas is extremely important. Especially, it is essential to expand the intensive shrimp farming area; rationally convert the farming area of black tiger shrimps to white-leg shrimps; make the planning of wild shrimp and rice-shrimp farming areas with sustainability certification showing the specificity of the farming model," suggested Mr. Truong Dinh Hoe. Assessing the market at the end of the year, Mr. Huynh Thanh Tan, General Director of Ca Mau Seafood Processing and Services Joint Stock Company (CASES), said that export activities would face some difficulties and challenges as world demand was slowing down. The main reason was the impact of inflation and recession, especially in major seafood import markets, such as the US and Europe. Many currencies were depreciating against the US dollar, which affected importers' profits, so the demand for importing seafood declined. In addition, the shortage of raw materials for processing for export was also a challenge for shrimp processing enterprises.

By the end of November 2022, Vietnam's seafood export turnover reached $10 billion for the first time. It is expected that by the end of 2022, this figure could hit $11 billion. Of which, shrimp exports topped $4.3 billion, up 30 percent, and pangasius exports exceeded $2 billion, up 80 percent over the same period in 2021. With the above results, the seafood industry has finished before the schedule compared to the target set by the Prime Minister of achieving a seafood export turnover of $10 billion in 2025. This can be considered an important historical milestone for the country's seafood industry.