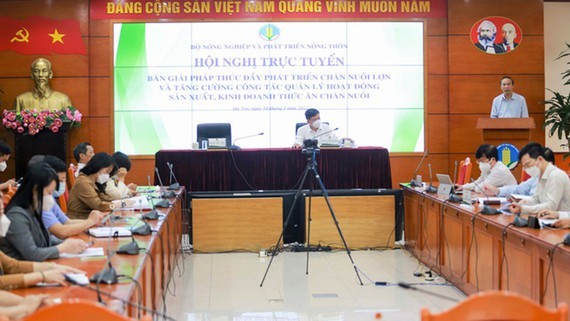 The scene of the conference. (Photo: VGP)

According to Mr. Tong Xuan Chinh, Deputy Director of the Department of Livestock Production, animal feed accounts for 65-70 percent of the costs for pig farming. Over the past two years, the price of raw materials in the world has climbed by 20-40 percent, depending on the type of product. Some materials have increased drastically, such as corn, oil cake, and wheat.

According to Deputy Minister of Agriculture and Rural Development Phung Duc Tien, reducing the cost of animal feed in the livestock cost price is one of the important solutions. Shortly, the Ministry of Agriculture and Rural Development will coordinate with DeHeus Company to cooperate with provinces in the Central Highlands to establish cooperatives focusing mainly on growing cassava and maize with the participation of enterprises that apply processing technology to proactively source raw materials, reduce pressure from imported animal feed.