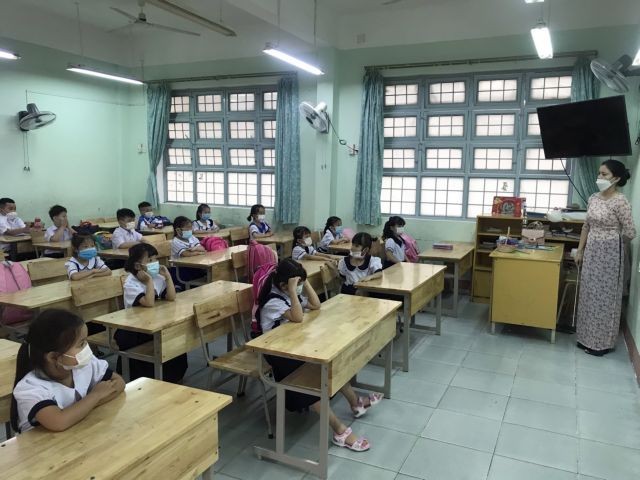 Hanoi’s Department of Education and Training is planning many different scenarios before allowing local students to come back.

As scheduled, after Hanoi basically finishes vaccinations for local people, students of the city will be back to school at the beginning of November.

However, another scenario planned that students of grades 6, 9, 10 and 12, living in pandemic-free areas (also called green zones) could return to school earlier than the above timeline.

Ba Vi District has not recorded new cases of Covid-19 for a long time. Currently, students are still learning online but if possible, he suggested allowing them back to school soon.

Students, especially in the first, second and sixth grades, were believed to learn better if they were in the school, she said.

The first-grade students needed time to get used to teachers and schools, she said.

Second and sixth-grade students started to learn following the new general education curriculum in 2021 so, they needed direct instructions from teachers at school, she said.

If the students were allowed to return to school soon, classes in the district would be divided into two groups so that students would learn in morning and afternoon shifts to ensure safety, she added.

Tran The Cuong, Director of the city’s Education and Training Department, said that allowing students to return to schools was a legitimate desire of both parents and teachers.

However, the education sector still needed to consider carefully before deciding when students returned to ensure safety, he said.

In Can Tho City, Duong Tan Hien, Director of the city’s Department of Education and Training, said that the department planned to ask the local administration to allow students, living in areas applying the Government’s Directive No.15, to return to school on October 4.

For pre-school students, the education sector would consider more carefully before allowing them to return to school, he said.

In the Central province of Nghe An, the education sector has decided to allow students to return from the beginning of October.

In the province’s Vinh City, students will continue learning online due to the complex developments of the Covid-19 pandemic in the city.

In the Southern province of Tay Ninh, the education sector has asked all local schools to prepare for students to return to school on October 11.

All schools were told to prepare scenarios to properly handle students with symptoms of fever, coughing or difficulty breathing.

In the Central Highlands province of Dak Nong, hundreds of schools have been opened to welcome local students since September 27.

Kindergartens have allowed 5 and 6-year-old children to return to school. For elementary schools, students of a class are divided into two groups, with one group learning in the morning and the other in the afternoon.

In the Northern province of Thanh Hoa, teaching and learning activities have been implemented following three levels since September 20.

Level 1 means all students living in areas that have not applied social distancing measures are allowed to return to school.

Level 2 means all students living in areas that have applied social distancing measures under the Government’s Directive No.15 are allowed to return to school, however, the classes are divided into morning and afternoon sessions.

Level 3 means all students living in areas that have applied social distancing measures under the Government’s Directive No.16 continue learning online.

Primary schools have yet to organize meals at school to ensure safety for students.