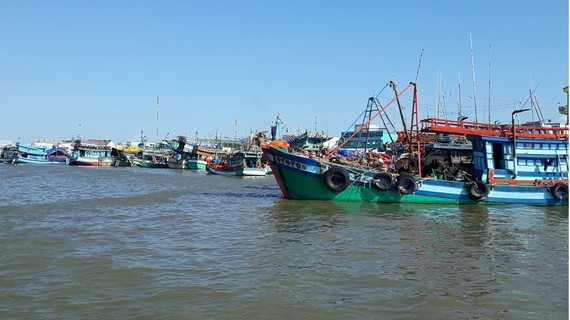 Due to ineffective operation, many fishing boats in the Mekong Delta have to stay ashore. (Photo: SGGP)

Affected by the pandemic

Tac Cau Fishing Port in Chau Thanh District in Kien Giang Province is one of the largest fishing ports in the Mekong Delta. This fishing port attracts many fishing boats of local seafarers. However, according to the Department of Agriculture and Rural Development of Kien Giang Province, currently, 16 out of 30 businesses have temporarily suspended operations, not because they failed to ensure measures for the Covid-19 prevention. When seafood processing factories halted operations, companies that buy seafood and aquatic products at Tac Cau Fishing Port have also had to stop because there is no consumption, and many owners of fishing vessels also no longer have partners to purchase seafood.

He said that he had two fishing boats. One boat built under Decree No.67 had been staying ashore for a long time due to inefficient exploitation, and the smaller one was still operating. However, due to the impact of the pandemic, seafood prices decreased, so the fishing industry was not very efficient. Sometimes, fishing boats suffered a loss of oil cost.

According to Mr. Nguyen Dang Khoa, Chairman of the People's Committee of Song Doc Town in Tran Van Thoi District, currently, the number of fishing boats traveling through the Song Doc Estuary has decreased by about 30%. “Border guards are coordinating with local authorities to strengthen control and strictly manage fishing boats and fishermen entering and leaving the estuary. Fishing vessels and fishermen from other provinces, when entering the estuary, must commit to not going ashore, not meeting other people, and not leaving their places of residence, leading to many fishing boats deciding to stay ashore," said Mr. Khoa.

In addition, another reason that causes difficulties for fishing vessels is a shortage of seafarers. Mr. Phan Van Khanh, whose fishing boat is docking at the Cai Lon River in Kien Giang Province, said that due to the pandemic, many localities had set up checkpoints to control vessels and fishers going ashore. It was difficult for seamen to travel from one locality to another. Therefore, his fishing boat was still lying on the shore for not finding enough workers to operate.

According to statistics, Kien Giang Province is the locality with the largest number of fishing vessels in the Mekong Delta. The province has 9,861 fishing vessels with a length of 6 meters or more. There is a serious shortage of workers on fishing fleets in Kien Giang Province. The academic level of seafarers is also low, with 95 percent of them finished primary and secondary schools. The number of workers in the working ages of 18 to 50 accounts for 69%.

Similarly, the number of seafarers in Bac Lieu Province has constantly changed over the past time, and fishing vessels often lack labor. Especially for offshore fishing vessels, only about 30% of workers are local people, and the rest 70% are from other places.

It is worrisome that many experienced workers quit their jobs, while the number of young workers upholding this job has limited abilities; most workers do not want to work in the fishing industry. Localities also pay little attention to seafarers, and there is no regulation that owners of fishing vessels must follow agreements in the use of labor.

According to Ms. Cao Xuan Thu Van, Vice Chairwoman of the People's Committee of Bac Lieu Province, the province has directed specialized agencies to research and advise the provincial People's Committee on specific mechanisms to manage the workforce of seafarers, strengthen management on fishing vessel’s owners for them to sign commitments to implement agreements with employees properly, and at the same time, have mechanisms to encourage and support workers in this field.

Besides, the People's Committee of Bac Lieu Province also requested the Department of Agriculture and Rural Development to coordinate with the People's Committees of coastal districts to organize training and guidance on professional fishing and labor safety; propagate the establishment of fishing teams, cooperatives, and trade unions operating in the post-harvest field attached with the human resource supply services for the fishing industry.