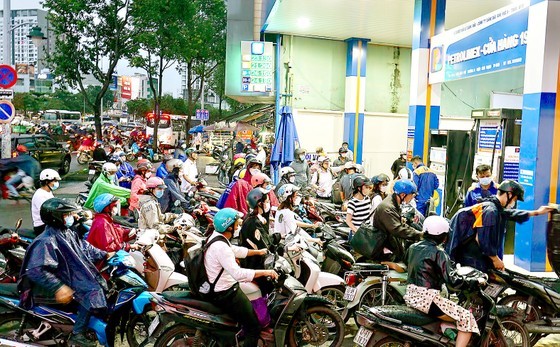 Comeco petrol station in Phan Huy Ich Street in Ward 14 of Go Vap District had only one fuel pump. A man who is in charge of the business of the station said that a few days ago, the station only received 3,000 liters a day; however, the tank truck can enter the city during two recent days, so the station had 6,000 liters whereas the average daily demand in the station is about 15,000 liters, so there has been a disruption of service.

Similarly, at the Tanimex petrol station at the corner of the intersection of Tay Thanh and CN 1, Tan Binh Industrial Park in Tan Phu District, a crowd of customers were waiting for their turn to fill their vehicles up but it is not as crowded as a few days ago.

On the evening of October 11, after the price of gasoline increased, many gas stations in the Southern Province of Dong Nai’s Bien Hoa City continued to stop selling or just agreed to sell VND30,000 to VND50,000 for each motorcycle driver. Specifically, Vuon Mit gas station in the intersection between Nguyen Ai Quoc and Phan Van Thuan streets still announced suspended operation while waiting for the import of goods. Worse, gas station No. 5 in Nguyen Ai Quoc Street hung the board that the station is running out of petrol. Many gas stations in Trang Bom, Thong Nhat and Long Thanh districts announced stopping their operation.

Some other big gas stations such as Cau Moi Gas Station belonging to Tin Nghia Petroleum Corporation stopped selling in the morning and reopened this afternoon but agreed to sell VND30,000 to each motorbike driver. The No. 1 Petroleum Company of Phuong Du in Nguyen Ai Quoc Street followed suit to sell VND50,000 for a motorcycle.

Ms. Nguyen Thi Thanh Loan, Deputy Director of the Directorate of Market Surveillance in the Southern Province of Binh Phuoc said that through inspection, 41 stations were really running out of both petrol and oil, 38 stations ran out of gas and still had oil and five stations ran out of oil but gasoline. In recent days, the provincial Directorate of Market Surveillance has strengthened inspection and supervision of the observance of the law in petroleum trading of all 392 establishments in the province and has not detected any petrol stations showing signs of hoarding.

Elsewhere in the Southern Province of Binh Duong, the provincial Department of Industry and Trade said that there were about 173/477 petrol stations in the area closed for various reasons.

In Hanoi, people were also queuing for filling up petrol yesterday afternoon. Although not being scarced, some gas stations in streets such as Lang Ha, My Dinh, Pham Van Dong, and Hoang Quoc Viet still closed or only sold a little while waiting for a new price adjustment. Because people worried about the high price of gasoline, they gathered in gas filling stations to fill their vehicles up.

According to the adjustment, the price of gasoline E5RON92 increased by VND560 a liter to VND21,292 per liter while RON95 gasoline saw an increase of VND 564 a liter to VND22,007 a liter. Particularly, diesel and kerosene increased sharply, respectively VND1,979 a liter and VND1,132 a liter. Fuel oil remains stable at old prices. Along with that, the inter-ministerial has decided to reduce the contribution amount to the stabilization fund for petroleum products and spend VND200 from the fund for a liter of diesel.

On October 11, according to the Ho Chi Minh City Directorate of Market Surveillance, 137 stores in the southern largest city reported that they had run out of petrol. Therefore, in the afternoon of the same day, the municipal People's Committee issued an urgent directive. Specifically, in the official dispatch sent to the Department of Industry and Trade and the Directorate of Market Surveillance, the People's Committee requested to ensure the supply of petroleum in the city.

The Department of Industry and Trade was urged to request petrol and oil businesses in the city not to interrupt the supply of petrol in their distribution system. At the same time, the business ought to maintain sales of the commodity at petrol and oil retail stores.

In particular, the city's People's Committee required petrol and oil wholesalers and distributors in the city to share the supply and profits in the distribution system for petrol filling stations reasonably.

The People's Committee of Ho Chi Minh City assigned the Department of Industry and Trade and the Directorate of Market Surveillance to closely monitor the sale of petrol at petrol and oil retail stores citywide to make sure that the sales of petrol and oil businesses are not interrupted. City authorities will throw the book at violators; related agencies must keep an eye on the situation for prompt reports and proposals to the city People's Committee.