Floods sweep through highland district in Nghe An Province 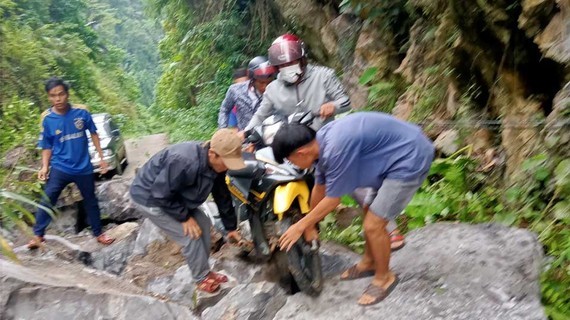 Villagers must carry their motorbikes over the landslide area to get out, which is very dangerous. (Photo: SGGP)

At the scene, Mr. Tran Xuan Tu, Head of On Village, said that in the Cua Tay Ao area, the highest point of the road to the Ruc people villages, a large volume of limestone rocks fell from a height of 30-40m and blocked the road, isolating three villages, making local people unable to travel normally.

Tran Van Lieu, an On villager, said that limestone rocks have continued to fall on the road. Villagers must carry their motorbikes over the landslide area to get out, which is very dangerous.

Nghe An plans to evacuate people from flash-flood areas

Mr. Tho Ba Re, Vice Chairman of Ky Son District People's Committee in Nghe An Province, on October 7, said that the district has been planning to relocate people from the area at risk of landslides after flash floods. 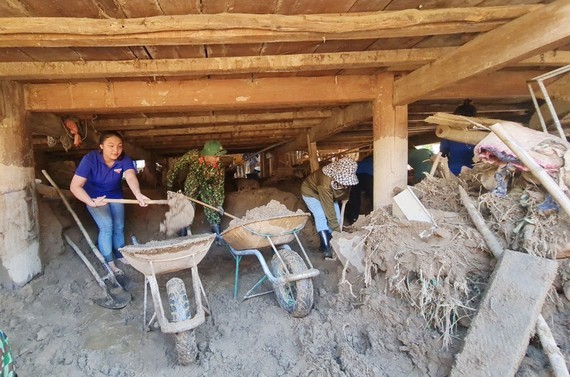 Many houses in Ky Son District are flooded in mud after the flash floods. (Photo: SGGP)
Currently, the mountain located to the West of Hoa Son Village in Ta Ca Commune has appeared many large, long arc-shaped cracks with a depth of more than one meter. Twenty residential houses with dangerous cracks are in danger of collapsing at any time. Many others are showing the signs of cracking the ground and the wall, tilting, and being flooded with mud. Mountain cracking has also caused subsidence, cracks, and landslides on the road from Muong Xen Town to Tay Son Commune, the section passing through Hoa Son Village. Ky Son District held a meeting with Hoa Son villagers and acknowledged their desire to move to a new and safe place. In the immediate future, Ky Son District assigned the People's Committee of Ta Ca commune and the Management Board of Hoa Son Village to relocate households in dangerous areas to live with others in the village. When there are heavy rains, they must actively and resolutely evacuate people in high-risk areas to a safe place. At the same time, the district will also plan to survey the area to establish a long-term stable resettlement project for local people. Mr. Nguyen Van Tien, Deputy Director of the General Department of Natural Disaster Prevention and Control under the Ministry of Agriculture and Rural Development, on his field trip at Hoa Son village on October 6, said that due to geological fault, the risk of soil from the mountain falling on people's houses is fairly high. Mr. Tho Ba Re said that the resettlement of villagers is difficult. On the one hand, Ky Son District's topography is characterized by steep slopes, with one side being mountains and the other being deep abysses or rivers. Flat land areas are rare. On the other hand, the district's resources are limited. Therefore, the district is looking forward to receiving support from the Central and provincial governments. * In Thanh Hoa Province, Chairman of the provincial People's Committee Le Duc Giang directed relevant agencies and localities to urgently handle the incident on the left side of the dike on the Ma River, the section passes through Hoang Dao Commune in Thanh Hoa City. Due to heavy rains from September 28 to October 4, the one-kilometer-long dike section has been subsided, threatening the lives and properties of about 29,000 people in five communes on the left bank of the Ma River. According to the assessment of the disaster prevention agency, this is a dangerous incident that needs to be tackled immediately. * On the same day, at Km75 on Highway 49, the section through A Co Pass in A Luoi District in Thua Thien - Hue Province, Thua Thien - Hue Road Construction and Management Joint Stock Company continued to gather forces and vehicles to clear landslide rock debris for smooth traffic. A company representative said that because of heavy rains caused by Storm Noru, landslides had occurred six times at that location, causing traffic jams. Therefore, the unit has had to be on watch to ensure smooth circulation of the only road from Hue City to A Luoi.
By Minh Phong, Duy Cuong, Van Thang – Translated by Thuy Doan