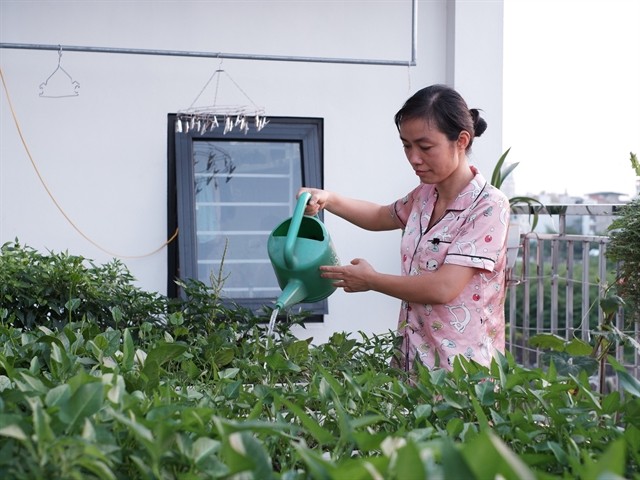 Thoa works in her garden twice every day. Photo courtesy of Pham Thi Kim Thoa
More and more people are planting vegetables, raising chickens and even fish in small yards in creative urban gardens amid the yards of multi-story houses, balconies or high-rise living quarters.

The planting spaces have provided both essential vegetables and a green space to relax for the owners.

Pham Thi Kim Thoa, 36, a civil servant, has nurtured a garden on the roof of her five-story house in Hoang Mai District, Hanoi, for five years now.

Her first task each day is getting up early in the morning and going to the garden to work there for an hour.

After work, in the afternoon, she also spends another hour tending the garden. In this social distancing period, she has more time with the garden than ever before.

She plants various kinds of vegetables according to the season, as well as flowers and even fruits.

“Vegetables are much easier to grow in winter when the weather is cooler,” she told Vietnam News. “In summer, I concentrate on planting melon, bitter melon and cucumber.”

“Planting on the roof is much harder than in a normal garden as I have to bring soil up there, and put out Styrofoam and plastic boxes with a good drainage system,” she said. 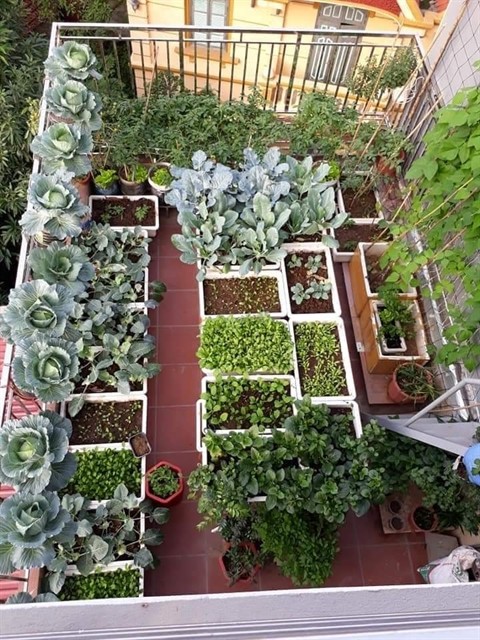 Thoa's rooftop garden with various kinds of vegetables. Photo courtesy of Pham Thi Kim Thoa
Thoa even brought chicken manure from her homeland in the northern province of Nam Dinh as a fertilizer for the vegetables, and has also bought various bio-fertilizers in the market.

The 40-square-metre garden supplies enough vegetables and some fruit for her family and her younger brothers living nearby. She even shares some with neighbors.

“I have never used any kind of insecticide so my vegetables and fruit are safe,” she said.

“In this period, buying vegetables is not easy and it is even at a higher price, which is not a problem for me as I can plant various kinds of vegetables for daily use.”

Thoa said at first she was extremely excited to enjoy the fresh vegetables or fruit but such joys have now turned into simply normal.

“Yet working up in rooftop garden is still relaxing for me, especially in this pandemic period,” she said. “My husband and children also join me there as we have more time at home. I think that I need more time for my garden.”

Thoa's children enjoy the rooftop garden. Photo courtesy of Pham Thi Kim Thoa
For middle-aged To Quoc Cuong in the southern province of Binh Duong, his 60sq.m rooftop garden, has turned into a special park for his two children during the pandemic.

Cuong grows various kinds of vegetables and even raises fish in tanks.

“We have self-supplied with vegetables for the past two years,” he said. “During this period, I share vegetables with six neighbors. Vegetables are now a valuable gift to my neighbors as it’s not easy to go out to buy things, especially green vegetables.”

Cuong said his children, instead of playing games on the internet or watching TV, had now joined him up in the garden to feed the fish, pick vegetables and sow seeds.

“Working and playing in a rooftop garden is so much more useful for them than the net. They can get fresh air and learn about the environment,” he said. 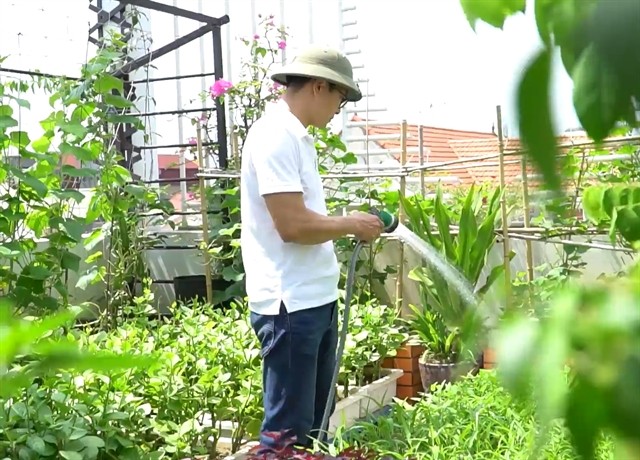 Ngoc spends lots of time with his garden. Photo courtesy of Lo Ba Ngoc
Lo Ba Ngoc, 40, who resides in Hoang Mai District, has inspired his children the same way.

He has turned his 75sq.m rooftop yard into a garden with a fish tank, flowers and vegetables.

“Before, my children did not know anything about plants and worms, and could not tell the difference between vegetables,” he said. “They have learnt a lot from this garden.”

“We have been very happy with it, even these days. The green garden is a recreational space that has come to us out of the blue during the pandemic.”

During social distancing, his family enjoys the garden at various times of the day: early morning, sunset and on full-moon nights. 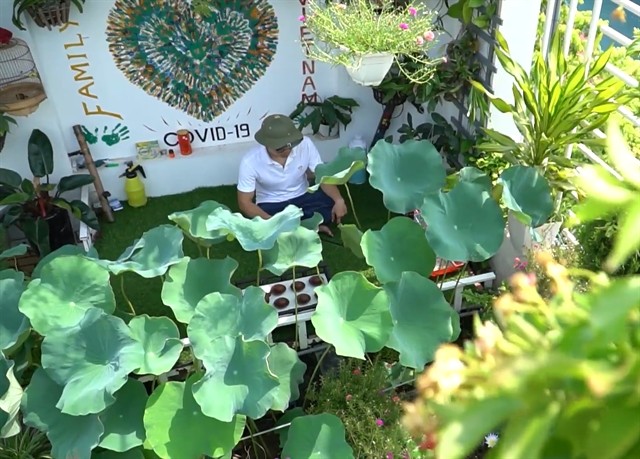 Vu Thien, a vegetable seed seller in Hanoi, said the number of orders he receives these days had increased by 50 per cent compared to normal.

“More people plant vegetables at home so they order more seeds, mostly online as I closed the shop due to the social distancing rule,” he said.

“The trouble for me sometimes is that it’s not so simple to ship the seeds as travelling is not as easy as before.”

But things have improved over time as local authorities have adjusted regulations applied to those delivering goods.

Dam Lan Phuong, another seed seller in Hanoi, shared the same opinion on the increase of orders for seeds of quick-growing vegetables such as mustard greens. 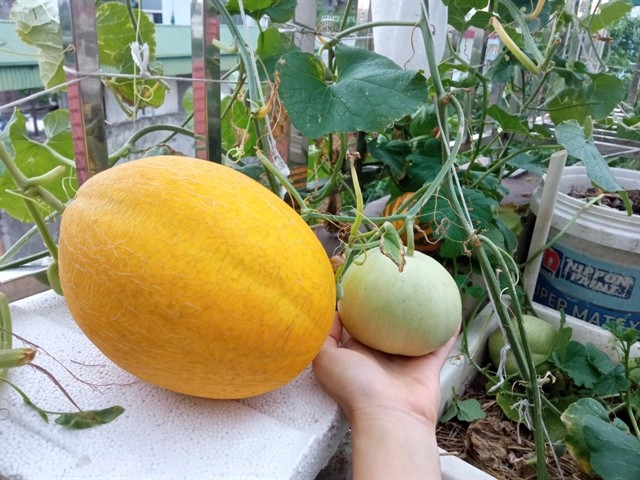 Thoa's melons raised in her garden. Photo courtesy of Pham Thi Kim Thoa
“Normally, I received 60-80 orders for seeds every day,” she said. “Now the orders have increased to 150 each day. Most of my clients live in high-rise living quarters or multi-story houses with planting corners in the balcony or rooftop gardens. They choose easy-to-grow vegetables that they raise in plastic or Styrofoam boxes,” she said.

Mai Thi Loan, owner of a seedling shop in District 12, HCM City, has been much busier in the first weeks of social distancing, and now she distributes 1,000-1,200 orders every day to various provinces and cities across the country.

"Before the pandemic, we sold seeds and seedlings at shops and online," she said. "But since the city was locked down, we have sold them through electronic trade platforms and our fan page."