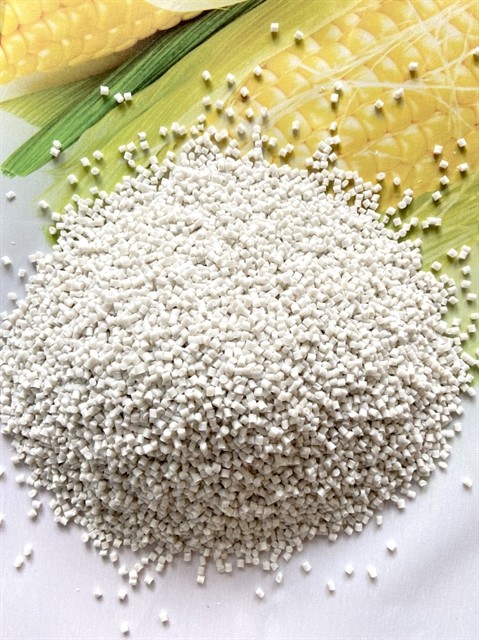 Bioplastic beads produced by iGreen company, a start-up in HCMC.  The environment-friendly material will help boost non-plastic consumption and reduce plastic waste. (Photo courtesy of Doan Van Tung)
It is one of only two bioplastic producers in Vietnam providing completely biodegradable bags, straws, forks and plates from bio-starch materials to the market as a substitute for single-use plastic, which contaminates the land and ocean.

The iGreen bioplastic product partially degrades in 12 weeks and completely after six months – in which 90 percent is turned into water, carbon dioxide and biomass for improving nutrition in soil.

It was granted a European standard compost certificate by the TUV Austria bureau of inspection and certification.

“Plastic pollution has been a disaster in Vietnam over the past decades, so our start-up was built as an alternative solution for reducing plastic,” Tung said.

“Our product offers a healthy choice for communities reducing the use of single-use plastic that seriously caused pollution on land and in oceans.”

He said each kilo of iGreen bioplastic beads could produce 120 biodegradable bags with a thickness of 18 micrometers – 15 percent higher than the same imported product.

The biopolymer researcher said the bioplastic product, which uses starch from maize and cassava, would be safe for both consumers and the environment, while the material had huge potential in Vietnam.

Dr Pham Phu Song Toan, an environment scientist of the Da Nang University of Technology and Education, said starch-based bioplastic and biodegradable products are safe as they degrade into water and carbon dioxide.

He said starch helped speed up the decomposition process of bioplastic products, but they should strictly control the mixture used in the production to ensure it is completely safe for humans. 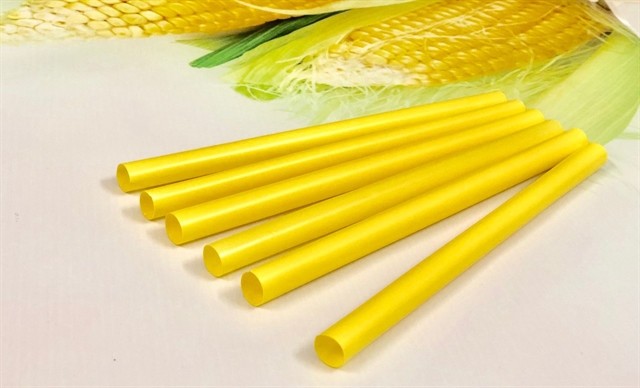 Straws are made from bioplastic materials such as the starch of cassava, maize and potatoes. Photo courtesy of Doan Van Tung
A number of coffee shops have begun using bamboo straws, glass and stainless steel straws to reduce single-use plastic straws and cups, while glass straws, wooden spoons, forks, knives and coconut shell bowls have also become common.

Tung said he hoped that bioplastic replacing single-use plastic and hazardous plastic would have great potential for domestic use and export for many years.

“The country’s Plastics Association reported that it produced 6.61 million tons for domestic use and export, of which packaging made up a 36 percent share, for total revenue of $22.18 billion in 2020. If the country could contribute only one percent to replace the plastic packaging, it could produce 20,000 tons per year,” Tung said.

He added that Vietnam’s plastic industry had been seeking plastic alternative technology solutions from environment-friendly and degradable materials in replacing plastic products.

He said iGreen bioplastic products including bags, straws, plates and garbage bags had been distributed to 30 agents, restaurant and hotel chains nationwide since early 2020.

Nguyen Ngoc Ly, director of the Center for Environment and Community Research, said Vietnam discharged 19,000 tons of rubbish every day, of which 16 percent was plastic waste but only educational awareness, habits and responsibility had been promoted.

She said the use of plastic bags had grown substantially, and could not easily be phased out in daily lifestyles. 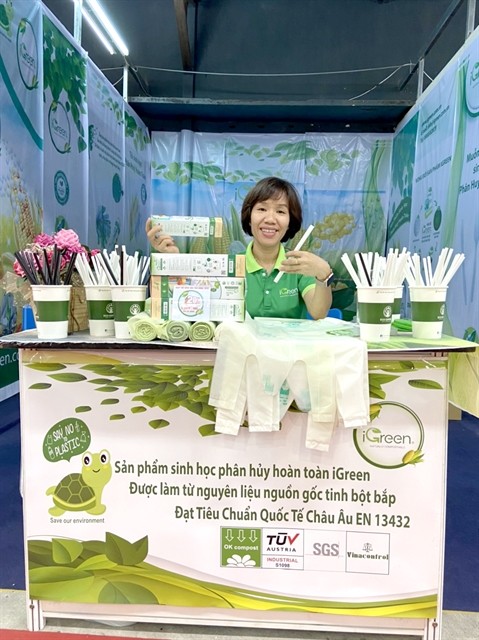 Bioplastic products of iGreen company are on display at an exhibition in HCMC. Bioplastic straws, bags and plates can degrade within 12 weeks. Photo courtesy of Doan Van Tung
Nguyen Thu Trang, deputy director of Greenhub, a center for supporting green development, said Vietnam had begun building awareness of plastic pollution among consumers as well as collection and recycling.

“Bans on single-use plastic are rarely seen at many destinations, while plastic alternatives were scattered,” Trang said.

Trang said environment protection tax on plastic was only VND50,000 per kg, but plastic bags were sold with an even lower tax.

She suggested that a tax should be levied on plastic bag consumption, which could help change the consumer habit of using too much plastic packaging.

She said that bioplastic and degradable production needed supportive policies from the government in reducing single-use plastic and hazardous plastic pollution.

Tung has been calling for investment for iGreen bioplastic production, which he and other partners have been building for decades.

He said he hoped bioplastic would boom as plastic manufacturers changed to environment-friendly and sustainable production.

Tung said iGreen put its slogan ‘I Am Not Plastic’ on every product to emphasize the tough fight against plastic waste.