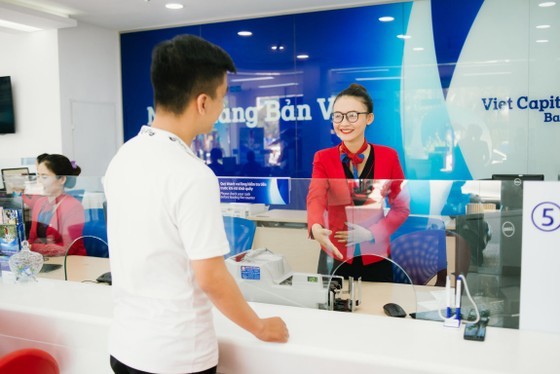 However, the interest rate rise also sends a message that the capital of commercial banks is no longer abundant. Therefore, it is difficult to maintain lending interest rates stably at a low level in the coming time.

Besides, a commercial bank that has not been allowed to increase the credit limit by the SBV explained that the increase in deposit interest rates was to meet the new regulations on the capital adequacy of the SBV, which becomes effective from October 1. The SBV stipulates that the ratio of short-term mobilized capital for medium and long-term loans will decrease from 37 percent to 34 percent, so the bank must promote capital mobilization for above 12-month terms to restructure capital. Not to mention that, according to the SBV, in the first seven months of the year, credit in the real estate sector rose by more than 14 percent, which also put pressure on increasing capital mobilization because most credit in this sector is medium and long term.

In that context, according to many experts, the US Federal Reserve's (FED) third sharp interest rate rise has been putting great pressure on the domestic VND/USD exchange rate, forcing banks to raise deposit interest rates to maintain the position of the Vietnamese dong. Mr. Dinh Quang Hinh, an analyst at VNDirect Securities, predicted that the deposit interest rate level would possibly increase by 0.3-0.5 percentage points in the second half of this year. Accordingly, the average 12-month deposit interest rate of commercial banks will advance to 6.1-6.3 percent per annum by the end of 2022.

It is considered that commercial banks have continuously increased deposit interest rates over the past time because liquidity in the banking system is no longer abundant, even tense sometimes. The speed of capital mobilization could not keep pace with credit growth, thereby putting pressure on the interest rate level. The SBV’s report also shows that, by August 26, the credit growth of the banking industry rose by 9.9 percent compared to the beginning of 2022, while the growth in capital mobilization merely reached about 3.8 percent - the lowest level ever in history. 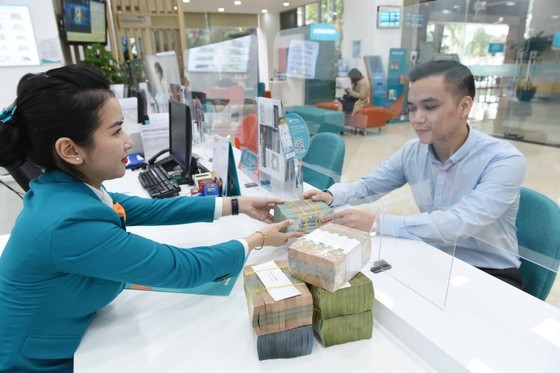 Customers do transactions at a bank. (Photo: SGGP)
The difficult capital mobilization occurred in the context of a dire need for strong cash flow to pour into the production and business sectors after the Covid-19 pandemic. Enterprises tend to withdraw money from the banking system to put into production and business activities because banks have no room for lending. Data from the SBV shows that deposits of economic organizations only edged up by 3.61 percent compared to the beginning of the year - the lowest half-year increase in the past five years. As of September 23, the SBV decided to increase 100 basis points (1 percentage point) for a series of key operating interest rates, in which, the maximum interest rate for deposits with a term from one month to less than six months is raised from 4 percent to 5 percent. A representative of the SBV-HCMC Branch explained that the increase in deposit interest rates would help credit institutions attract money and meet capital needs for economic recovery and growth. Dr. Vo Tri Thanh, former Deputy Director of the Central Institute for Economic Management, also said that the increase in the SBV's operating interest rates has reduced pressure on inflation and, at the same time, eased pressure on the exchange rate. The 1-percent increase is not too large and does not affect much the support of the production and business recovery process but strengthens the possibility that Vietnam can maintain macroeconomic stability. Meanwhile, a leader of a commercial bank said that the impact of the increase in refinancing and rediscount interest rates is not significant, but raising the deposit interest rate ceiling will directly affect banks, businesses, and people. Because when the deposit ceiling is lifted, it allows banks in need of capital to pay higher interest rates to depositors. Thereby, the banks’ input costs also climb. Banks may have to increase lending rates. "The pressure of increasing lending interest rates is present, especially when the capital of the economy still depends mainly on the credit capital of banks," said the representative of this bank.

The Prime Minister has directed to prevent lending interest rates from rising. As a result, borrowers can still borrow at an unchanged interest rate while depositors enjoy a higher interest rate, thus narrowing the banks' net interest margin (NIM). However, this is a political task that the banking system needs to join hands and share difficulties with businesses and people. The SBV can introduce encouraging policies that any bank which reduces or stabilizes lending rates and shares difficulties with enterprises will be considered for an upgrade in the rating of commercial banks or may be granted additional credit targets.

In order to keep lending interest rates stable when deposit rates increase, the only solution that requires high social responsibility is for commercial banks to reduce costs. In addition, the effective implementation of the Government's 2-percent interest rate support package, as well as preferential credit programs, will make an important contribution to stabilizing lending rates for businesses.