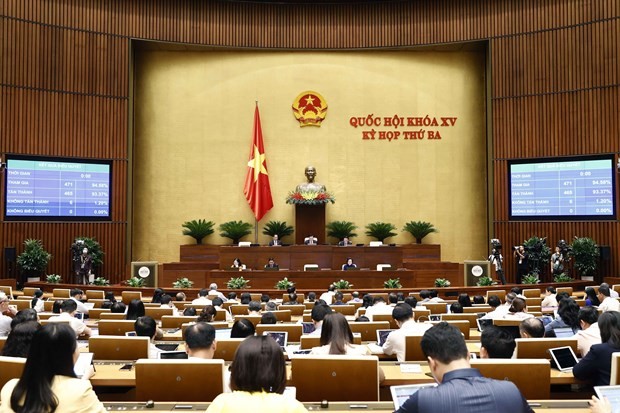 A working session of the third sitting of the 15th National Assembly (Photo: VNA)

Also in the morning, the legislators scrutinised the draft revised Petroleum Law, which comprises 11 chapters with 64 articles.

The bill aims to enhance the state management’s effectiveness and efficiency in the field, remove barriers, and create a favourable legal corridor for investors, thus helping improve the investment climate in the oil and gas sector.

At the end of the discussion, Deputy Minister of Industry and Trade Dang Hoang An gave further explanations on the document.

The draft law amending and supplementing some articles of the Law on Radio Frequencies was also tabled for discussion, during which most of the deputies agreed on the need and scope of the amendments and supplements.

The legislature is scheduled to vote on a draft resolution on piloting vocational training for inmates outside prisons, the law amending and supplementing some articles of the Law on Intellectual Property, the revised Law on Insurance Business, along with a number of resolutions, on June 16, also the last day of the meeting.

The session will be broadcast live on national television and radio channels, and the NA television channel.