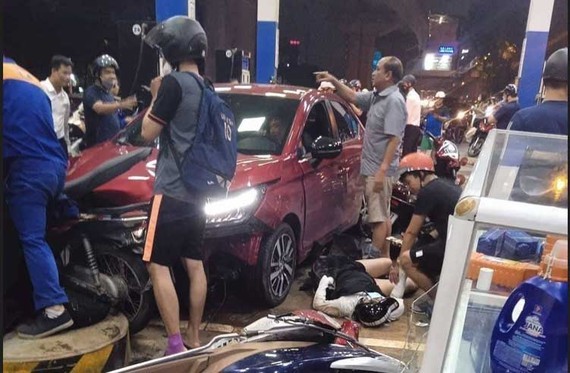 On August 13, a drunk driver lost the control of his car and crashed directly into a gas station in Thinh Quang Ward of Dong Da District in Hanoi, causing injury to several victims. Three days before that, a serious traffic accident had happened in A Luoi District of Thua Thien – Hue Province, killing four people and injuring another two. The truck in the accident, due to being overloaded, became too hard to control when moving downwards a hill and bumped into two motorbikes.

In July, traffic accidents nationwide killed four people due to the sleepiness or carelessness of vehicle drivers.

Statistics from the National Traffic Safety Committee reveal that in the first 7 months this year, the number of traffic fatalities rose by 7 percent compared to last year. The most common reasons for these accidents are drunk drivers, lack of observation, speeding and recklessness, sleepiness, and overloading.

Many measures have been implemented to reduce the traffic accident quantity, yet they are not thoroughly done.

One supposedly useful method is to install a monitoring camera on vehicles to for more convenient driver supervision and management. However, this method is just loosely followed. Many drivers purposely turn off this camera or make it unable to perform the task smoothly.

In addition, such violations as speeding, following the wrong driving routes receive too mild a sanction.

Moreover, a lot of transport enterprises focus more on profit instead of traffic safety, and just exercise a loose or even no management on their drivers. Safety maintenance measures to them is merely a formality.

In order to reduce traffic accidents, firstly, transport companies must try to raise the awareness of their drivers while actively supervising their routes to timely detect law violations and correct these activities.

Also, the Transport Departments of all localities are asked to more strictly monitor the implementation of safety maintenance measures among local transport businesses.

It is forecast that on the upcoming Independence Day, the traffic amount will significantly rise and become more complicated. Therefore, Standing Deputy Prime Minister Pham Binh Minh on August 16 sent Official Dispatch No.724/CD-TTg to related ministries and state agencies, as well as all localities about ensuring traffic order and safety during this holiday weekend.

Besides requesting a high quality of passenger and freight transport, the Dispatch asks patrol teams to strictly handle any law violation cases. A hotline for traffic safety and order must be introduced so that the public and report any law-breaking activities, especially during this national holiday.