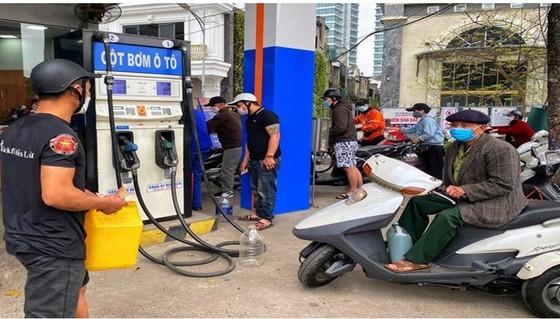 Many people in Hanoi have been dashing to petrol pumps armed with storage containers to buy gasoline for storage
In recent times, many people in Hanoi have been dashing to petrol pumps armed with storage containers to buy gasoline for storage or retail as long lines of motorists have been seen at a number of fuel filling stations across the country.
On the afternoon of November 14, police in Vietnam's capital city of Hanoi advised against storing fuel at home because of the risks posed due to its highly flammable and combustible nature. Petroleum stored in plastic cans or inappropriate storage equipment, easily leads to the leakage of petrol and oil, creating a dangerous environment for fire and explosion, especially in closed and narrow spaces.
In households, storage of gasoline is often placed together with other items in the basement or first-floor areas of the house (it can be placed outside or in the same living area).
According to the police, these areas are often not isolated from the surrounding area and do not have specialized electrical equipment to ensure safety against fire and explosion. This can cause a serious risk of injury, loss of life and damage to not only people’s properties but to others in the vicinity.
Thus, Hanoi City Police warned people against illegally storing petrol and oil in any form but to equip portable fire fighting equipment as well as fire prevention knowledge to promptly respond to fire and explosion incidents.
Police officers recommended people strictly comply with the safety regulations on fire prevention and fighting during the course of business activities as well as maintain conditions for ensuring fire safety according to regulations and safety procedures in the process of importing and exporting petroleum.
In particular, staff in gas stations were asked to sign a commitment not to sell gasoline and oil to people carrying storage containers such as bottles, jars, cans, barrels, and drums.
Additionally, warnings about the dangers and unsafe risks of fire prevention and fighting for combustible substances such as gasoline and oil must be posted at these venues to warn people about the risk of fire and explosion.
In addition, people should not store gasoline and oil other than in equipment and warehouses that have been approved and accepted for fire prevention and fighting.
The act of hoarding petrol and oil will be sanctioned according to Clause 4, Article 32 of Decree 144 providing for sanctioning of administrative violations in the field of social security, order, and safety.

By Do Trung – Translated by Anh Quan