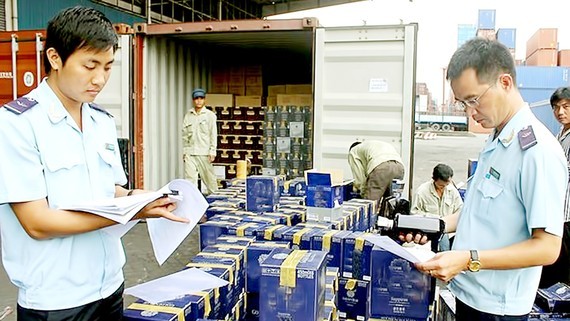 Statistics reveal that in the first half of 2022, there were nearly 54,200 cases of law breaking related to smuggling, trade fraud, and counterfeit goods (a drop of 25 percent compared to this time last year). Functional agencies retrieved VND3,728 billion (US$159 million).

Deputy Director of the Police Department for Corruption, Smuggling and Economic Crimes Vu Nhu Ha stated that smugglers now use legal entities for their crimes, especially with goods whose prices are fluctuating a great deal like fuel.

Smuggling activities usually go along with money laundering, money transfers in large amounts across borders. The act of appropriating tax refunds has been detected lately, with the quantity coming to VND500 billion ($21.4 million).

There has been a rise in smuggling, trade fraud, and counterfeit goods for various essential commodities on popular social networks such as YouTube, Facebook, Zalo, Tiktok.

Deputy Prime Minister Pham Binh Minh – currently the Chairman of the Steering Committee 389 – stressed that towards the end of the year, there are more holidays, and hence a high possibility of an increase in these crimes. He therefore asked that state agencies and units must fight against the deterioration of morality among state officials and quickly update new methods and tricks in smuggling, trade fraud, and counterfeit goods so as to devise measures to stop them.